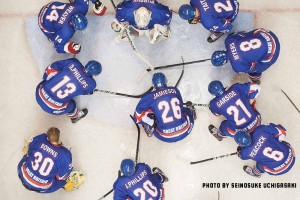 All eyes are on the GB ice hockey team this week.  If they win the Olympic Qualification Tournament in Latvia, they will become the first British ice hockey team to compete at an Olympic Games since 1948.

Admittedly, a Sochi medal is perhaps but a mere glimmer away in the distance, but just qualifying would be a massive achievement!

It will be tough – they have to play Latvia, France and Kazakhstan, with only the group winner progessing to Sochi 2014.  However, defenceman Danny Meyers is optimistic, commenting to the BBC: “We have the ability and the belief.  For us players, this is what we have dreamed of for so long and we are going to take the opportunity.”

Great Britain are currently ranked just 21st in the world. In total, just twelve teams will participate at the Winter Olympics.  The top nine teams in the world rankings automatically qualify.

Team GB won their pre-qualification stage group in November, which contained Romania, South Korea and Japan.  Head coach, Tony Hand believes their surprise victory over Japan could be the catalyst they need to go on to victory.

Hand told the BBC: “”I believe this is a very competitive squad and one of the most talented GB squads I have ever known… We are going to Latvia as the underdogs and I am sure most people in the ice hockey world don’t expect us to qualify. But this is the most close-knit squad I have worked with and they believe in their own abilities.”

Hand added: “There is no doubting that it is going to be tough but we are going out there and will do Great Britain proud.  We’ll need a bit of luck… but you just never know.”

The team is playing the hosts and tournament favourites later today.  You can watch the game live on ESPN, or listen to commentary on BBC Radio 5 Live Sports Extra.  Face-off is 5:30pm UK time.

Lindsey Vonn out of action