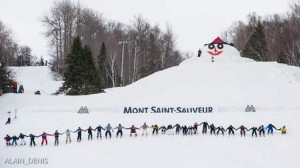 All together now… and flip!

Can you imagine thirty skiers doing a blackflip simultaneously whilst holding hands?!!  Well, it happened this week in the Canadian resort of Mont St Sauveur.

They practised alone, in pairs then in small groups for a couple of hours beforehand.  Then they made two attempts to jump altogether in a long line, holding hands.  The first attempt failed.

According to one of the jumpers, 23-year-old Jérôme Bernèche: “On the first try, the line broke, because we had problems with the angle of the slope that was steeper on one side than the other, so some people did not have the same speed.

“On the second try, everyone landed and the line didn’t break, everybody landed hand in hand.”

They had hoped their stunt would secure them a place in the Guinness Book of World Records.  Unfortunately they missed the deadline for application and so they’re going to have to do it all again!