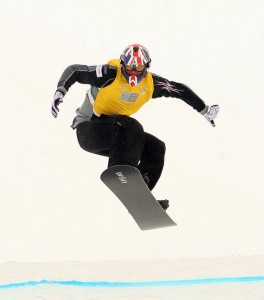 Jamie Barrow has today set a speed record on a snowboard of 94.26mph at the aptly-named ‘Speed Master’ ski event in Verbier, Switzerland.

It’s the first time an official UK speed has been set on a snowboard.

The speed trial took place on the notorious Mont Fort in Verbier.

Afterwards, Jamie posted on his Facebook page:  “I did it!!  I’m officiallyBritain’s fastest snowboarder!!! 151.7kph!!”

Twenty-year-old Jamie is part of the British snowboard cross team and three-times British Junior Boardercross Champion.  He actually grew up in Switzerland and, having started out as a skier, he only took up snowboarding in his early teens.  By the age of 15 he was already competing in Boardercross competitions.

During training earlier in the week, he told BBC Sport: “I’ve always been a speed fanatic… it’s like going down the motorway in a car and sticking your head out the window.  The noise is quite overpowering from the wind coming around you.  It sounds like a plane taking off.”

He continued: “When you get to the top of the track, it’s almost a vertical slope. You’re looking straight down it and it’s very scary.  You get butterflies in your stomach when you’re at the top. You just have to grit your teeth, head the board down straight and hope you make it down to the bottom.

“You have to be crazy to do this sort of thing, but I love it and I can’t even describe the adrenaline rush you get.

He also mentioned another possible challenge… “I was looking through the Guinness World Record book and I reckon I could break the record for the fastest speed on a snowboard while being towed by a snowmobile. I’m going to try and do that next season…”

Sounds crazy to us but we wish him lots of luck nonetheless!

Airlines could do more to help parents