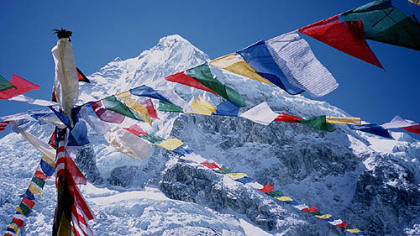 As we celebrate the first ascent of Everest sixty years ago, FamilySkiNews has been looking into the summiteers of the past couple of weeks, all keen to follow in the fabled footsteps of Edmund Hillary and Tensing Norgay’s great feat of May 29 1953.

During the ‘fair-weather’ window since 10 May, over 350 climbers have ascended the mountain, and several new records have been set.

On 19 May, Samina Baig became the first ever Pakistani woman to scale Everest.

The next day, 25-year-old Raha Moharrak became the first woman from Saudi Arabia and the youngest Arab ever to summit the world’s highest peak. Here’s a CNN report on her achievement:

The same day, 30-year-old the Nepali-born Canadian Sudarshan Gautam became the first double amputee to reach the summit.  (Gautam lost both arms in an accident while flying a kite in Kathmandu, which became tangled in overhead electrical wiring.)

The very next day, two 21-year-old Indian girls – Tashi and Nancy Malik from Dehra Dun– became the first twins ever to climb Everest together.

The same day, Brit Daniel Hughes climbed the mountain to raise around £1 million for Comic Relief, and conducted a video call from the summit on his phone for the BBC, wearing a red nose!  Needless to say, it is the world’s highest-ever red nose! Nepalese authorities subsequently reported that his actions broke the law, as permission is required to broadcast from the mountain.

Here’s his first live BBC broadcast on an HTC Smartphone using a satellite modem, from Camp 3 at 7,100m:

And here’s Daniel Hughes broadcasting from the summit, after a further climb of around 1,700m:

Yesterday, Japanese mountaineer, Yuichiro Miura, became the oldest person to climb Everest at the age of 80, as we reported here.  The previous record was held by Nepali national, Min Bahadur Sherchan, aged 76, who reached the peak in 2008.  Last year, an 82-year-old man died on the mountain trying to beat the record.  (The oldest woman ever to reach the summit was Japanese Tamae Watanabe, aged 73, just last year, as we reported here.)

However, perhaps the craziest feat over the past few days was not an ascent, but rather  an Everest descent!  Valery Rozov, a 48-year-old Russian extreme-sports star leapt off the North Face of the mountain at 7,220m, at a temperature of -18°C.

He had been preparing for the jump for over two years, and had developed a special new wingsuit for the jump.  Needless to say, it was the highest base-jump in the world!  After a few seconds of freefall, he flew for nearly a minute at around 200kph (125mph) before landing safely on the Rongbuk glacier at 5,950m.  Below you can see his story (and his jump, of course!):

Many more have reached the summit (and at least 8 people have perished on the mountain) so far this year.  Perhaps their stories have not reached the headlines but their achievements are every bit as impressive.  We salute you all!