Countdown to Winter in North America 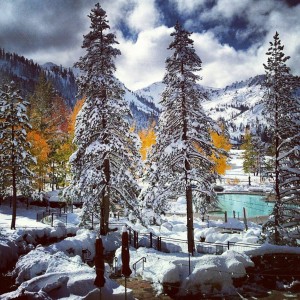 Snowfalls are starting across North America and the countdown is now on for this season’s skiing.  With so much new snow and various resort openings, FamilySkiNews.com is trying to keep track of all the early season news in the US as well as Europe.

In America, there’s usually a race for ‘first resort of the season’ between Loveland and Arapahoe Basin.  In both resorts, the artificial snow-making has been underway for several weeks now!  This year, Arapahoe Basin pipped Loveland to the post, opening on 17 October; Loveland opened two days ago on 23 October.

Also in Colorado, Copper Mountain opened for the day yesterday (24 October) but its official opening is not until 2 November. Breckenridge is scheduled to open on 9 November; Winter Park on 14 November, Vail on 16 November; Snowmass on 21 November and Aspen Mountain on 22 November.

California has already had some heavy snow storms, resulting in some changes to resort openings. Squaw Valley opened today, with around a metre of fresh snow falling in the past few days.  It’s official opening is 21 November.  Mammoth is currently scheduled to open on 8 November and Northstar on 16 November, although these dates may well change if the snow keeps falling. 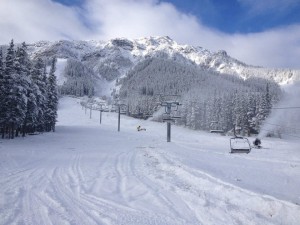 The provisional schedule for Utah currrently is as follows: Alta on 16 November; Snowbird and Park City on 17 November; Canyons on 23 November and Deer Valley on 8 December.  In New England, Killington in Vermont and Sunday River in Maine are due to open on 29 October.

Meanwhile, the first ski area in Canada- Mt Norquay Banff– is opening today.   Nakiska, also in Alberta, is scheduled to open this Saturday, with Lake Louise and Sunshine following on 9 November. 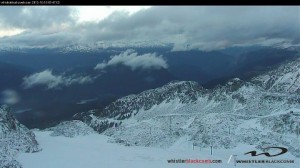 And here’s a picture from Whistler in Canada, with an encouraging dusting of the white stuff.   It’s official opening is on 22 November; with Silver Star on 23 November; Big White on 1 December; then Revelstoke and Marmott Basin on 3 December.

Of course, all these dates are subject to change – depending on suitable snow conditions – but one thing’s certain… the 2012/13 ski season is just about to start.  Fingers crossed for a good one, with better snow than last year!  The rate it’s dumping it down at the moment, it’s looking like a promising start. 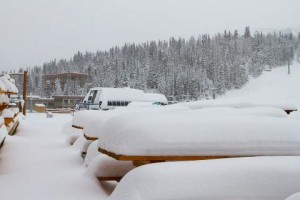 In the Alps too, temperatures are scheduled to plummit over the next few days.  Click back over the next day or so to see our weather report for the Alps and which European resorts are already open.