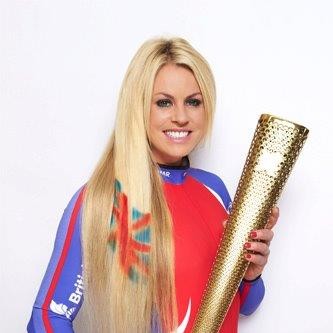 Skier Chemmy Alcott carried the Olympic flame today, as it continues its route through London on Day 67 of its 70-day tour.  It has also ridden on the London Underground – from Kingston to Ealing.

In Ealing, 30-year-old Chemmy – a triple Olympian skier – carried the torch in Ealing.

She has just tweeted: That was crazy!! I am shaking!! Wow this country is soooo ready to hold the BIGGEST and BEST sporting event in the world.
You can read her nomination story here:

“I have always looked up to Chemmy as a role model for how to succeed against all odds. She has been fantastic in putting skiing on the map in a country not known for its winters. As a team mate she listens and helps, as an athlete her dedication to succeed is paramount and as representation of our sport she continues to inspire young potentials to follow in her footsteps. As a triple Olympian and 7 time competitor in World Champs, she is still hungry for more despite shattering her leg in competition back in December 2010. She is still trying to come back and prove that you can be the best in the world in skiing and be from Britain. During her time away being injured I have watched her give back through sports awards presenting and after dinner speaking and seen how both young children and others are in awe of her sporting journey. That is why I think Chemmy should be given one of the greatest sporting honours ever by bearing the torch for her ‘home’ Olympics in London 2012.” 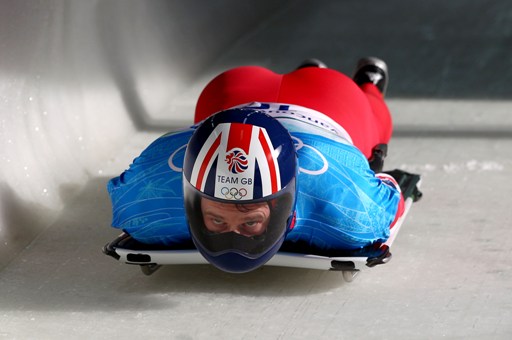 Adam coached the British women’s Bobsleigh team in the 2002 Winter Olympics, then competed himself in two Winter Olympics – in 2006 and 2010 in the somewhat crazy sport of Skeleton – where the athlete adopts a face-down, head-first riding position on a sled which resembles little more than a tea tray, and hurtles down a man-made ice track at speeds or around 135km per hour.

In 2010, Pengilly was elected by his fellow Olympic athletes to the International Olympic Committee (IOC) Athletes Commission, representing all GB sports.  He is one of just twelve elected onto the Athletes Commission to ensure that the needs and interests of the athletes are considered when organising Olympic Games.

Other British winter sports ‘celebrities’ carrying the torch to date include Katie Summerhayes, Ellie Koyander, Zoe Gillings, Talan Skeels-Piggins and Ed Drake.  One of Britain’s top male ski racers, TJ Baldwin, will also be part of the relay.  FamilySkiNews.com will report on his leg of the torch journey, when he meets the Duke and Duchess of Cambridge and Prince Harry at the Buckingham Palace handover on Thursday.

The torch is now nearing the end of its route… today is the fourth day of the flame’s week-long circuit of the capital.  In its final phase now, it is passing through each of the city’s 33 local authority areas before ending up at the opening ceremony of the London 2012 Olympic Games on Friday.