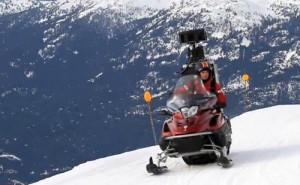 You can now ‘see before you ski’ in over 90 top ski areas around the world.As the name suggests, the Google Street View service which usually shows images of over 400,000km of roads.  However, in recent months, the Google snowmobiles have been scouring the ski slopes for images which include some of the world’s most sensational alpine scenery.

Google actually began filming ski resorts back in 2010 in the Canadian resort of Whistler Mountain, prior to the Winter Olympics, with a camera rigged onto a snowmobile.  It proved a huge success.

We first stumbled upon Google Street View in the Alps last July while we were hiking in Zermatt.  They were just beginning their European project to all the major European ski resorts, following a competition run by Google Switzerland.

Since then Google have been clocking-up some more kilometres.  Sölden, Ischgl, Saas Fee and St Moritz are among the latest resorts in Europe for the 2012/2013 winter season. 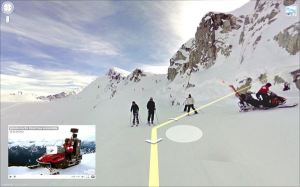 Glad they show us which way is downhil!!!

So why are Google adding these new piste views? Spitzer explains: “We hope to make your holiday preparations a little more enjoyable by adding some of the world’s favourite ski runs and resorts to Google Maps.”

Of course it’s not the same as actually being in the mountains, but we reckon it’s quite fun nonetheless –  for checking out pistes you’ve never tried before; for just sitting in a comfy armchair, soaking up the breathtaking scenery; or getting in the mood prior to your trip.