Is the sun finally setting for Norwegian Air? The Norwegian government’s announcement  this week, that Norwegian Air will not receive further financial support, has certainly thrown into doubt the future of the airline, as jobs are slashed. It also directly impacts the UK ski market to Scandinavia.

The low-cost carrier had previously stated that further aid was essential to maintain operations throughout the Covid-19 crisis. Its future is now looking bleak.

The company – and its 2,300 employees in Norway and several thousand colleagues in other countries – is facing a very uncertain future. The Chief Executive, Jacob Schram, released the following statement: “We would like to thank of our customers, colleagues, the Norwegian parliament, shareholders, leasing companies, creditors, bondholders, the travel industry and all others who have been supporting Norwegian in these challenging times.

“The fact that our government has decided to refrain from providing Norwegian with further financial support is very disappointing and feels like a slap in the face for everybody at Norwegian who is fighting for the company when our competitors are receiving billions in funding from their respective governments.”

Yesterday, Norwegian fired a whopping 10,000 employees, leaving just 600 to hold the fort. They announced new reductions in capacity, parking up 15 of their 21 aircraft. And they pulled out of Gatwick Airport.

Norwegian has a large base at Gatwick, where it was the third largest airline behind easyJet and BA, and also one of the three leading long-haul airlines currently operating at Gatwick, together with BA and Virgin.

Norwegian looked to be breaking boundaries and offering affordable flying, not only for shorthaul hops to Norway, but also with its impressive long-haul programme. Indeed, in 2019, Forbes magazine named the Norwegian Air Shuttle the “World’s Best Low-Cost Long-Haul Airline” for the fifth consecutive year. 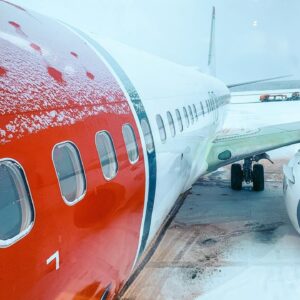 It also flew from Edinburgh and Manchester, providing UK passengers with frequent and affordable flights to Scandinavian ski resorts, not to mention families visiting Santa.

As Norwegian teeters on the brink of survival, this latest Covid-19 victim is a further blow to the UK ski market.  Thousands of customers are owed money for flights which did not take place, or have accepted vouchers for future trips.

Shram said “Our goal is to keep six aircraft on domestic routes in Norway, and I expect that Norwegian will also receive route support from the ministry of transportation, as previously announced.”

Norwegian will continue to operate a small number of routes, from Oslo to Alta, Bergen, Bodø, Evenes, Haugesund, Kirkenes, Molde, Stavanger, Tromsø, Trondheim and Ålesund; and also from Tromsø to Longyearbyen.