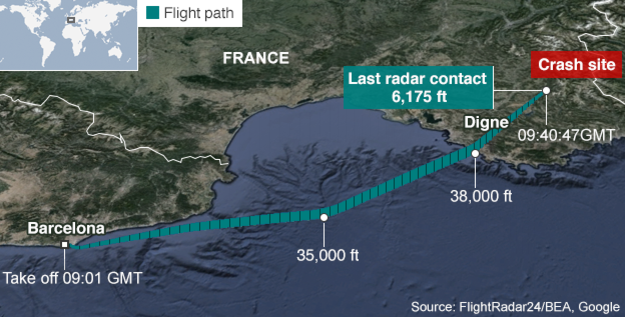 Breaking news: These are the main points of the press conference held just now by the Marseille public prosecutor, Brice Robin, following the tragic crash on Tuesday 24 March of Germanwings Airbus A320

Flight 4U952 from Barcelona was destined for Duesseldorf when it crashed in a remote mountain valley in the Southern French Alps near the ski resort of Barcelonnette. All of the 150 people on board were killed – including two babies and 16 pupils of a German school who were returning home from a Spanish-exchange trip.

According to the prosecutor, the co-pilot of the Germanwings jet deliberately forced the plane into the descent that led to the disaster. He pressed a button that accelerated the Airbus A320’s descent when alone in the cockpit. It was a “voluntary action”.

The co-pilot was named as German citizen Andreas Lubitz, 28. He was alone because the captain had gone to the toilet. When he returned, he refused to let the captain back into the flight deck. “The intention was to destroy this plane,” said Brice Robin.

Lubitz was apparently calm.  He said nothing during the final descent, and was breathing normally at the point of impact. Air traffic controllers had attempted to contact the plane during this time but had received no response. “Absolute silence inside the cockpit. Nothing, no word during the last 10 minutes.”

There is no indication that Lubitz’s actions were a terrorist act; according to Robin, suicide is a “legitimate” consideration.