The girls have won gold at the IPC Alpine World Cup skiing event in St Moritz, Switzerland, which means that they’ve won the Overall World Cup GS title for 2015!

Millie Knight is a Paralympic athlete and student who competes at international level for ParalympicsGB in alpine skiing in the slalom and giant slalom events with a sighted guide Jennifer Kehoe. When Millie was one year old, she contracted toxocariasis which resulted in the loss of most of her vision by the age of six. She joined the Great Britain Paralympic skiing team run by Disability Snowsport UK in 2012 and progressed to compete at international-level events.

After Millie’s St Moritz victory, her Snowsports coach, Duncan Freshwater, said: “This was a fantastic result for Millie and further demonstrates the progress DSUK has made since the significant cash injection from UKsport.  This result builds on the solid foundations laid by the previous coaching regimes across the last two Paralympic cycles.  Despite some of the Sochi medallists being absent from some of this years WC races this is the first time a GBR athlete has ever won an overall crystal globe in ski racing and in doing so Millie has beaten some Sochi medalists by margins that suggest she will be a real contender at the upcoming World Championships in Panorama in March.” 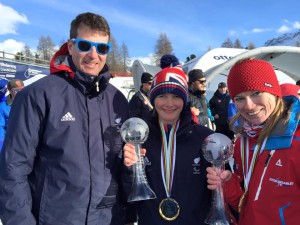 Meantime, Millie is thoroughly enjoying her winning streak: she has won every race she has entered so far in the 2014/2015 season.   At the St Moritz World Cup, she beat last year’s Allround World Cup Champion in both races and, with 4 races remaining, Millie leads the overall Europa Cup standings for 2014/2015.  She is currently 3rd in the Allround World Cup standings and is still in contention of winning the Overall Allround title.  She also has her eyes firmly set on the 2018 Winter Paralympics in Pyeongchang.