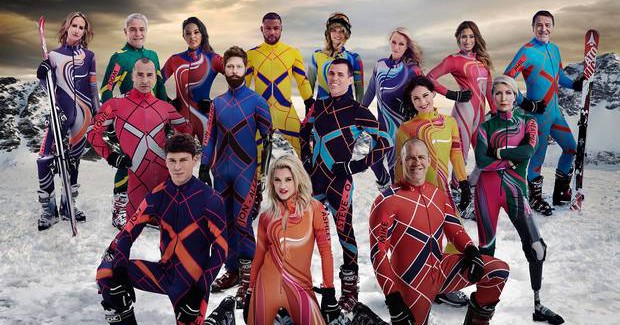 The Jump returns to Channel 4 this Sunday 1 February for its 2nd series ,and here at FamilySkiNews.com we can’t wait… it’s not so much car-crash television as ski crash TV, and just wait till you see the line-up! This year’s celebrity line-up of 16 superstars includes JLS-boyband member JB Gill, Paralympic silver-medal-winning cyclist Jon-Allan Butterworth singer Stacey Solomon, Jodie Kidd, and Mike Tindall , who will be taking on some of the most challenging and dangerous winter sports as they bid to become champion of The Jump. According to Channel 4, Series 2 promises to be bigger and even more daring than the last series, which was won in 2014 by Joe McElderry, after Steve Redgrave and Marcus Brigstocke were forced to pull out of the competition due to injury. The new series will feature more live events and a full gamut of winter sports including skeleton, ski cross, parallel slalom, bob-sleigh and snowboarding.  They will be trying ski jumping as one of the disciplines, as well as “a brand new heart-thumping live eliminator, ‘The Air Jump’”. This trailer gives you a taste of what the celebrities will be going through on the dreaded ski-jump:   And here’s what some of the contestants had to say about the series: TOWIE celebrity Joey Essex: “I’ll basically be a pro by the end of it.” Made in Chelsea’s Louise Thompson: “I love the freezing cold and the cool outfits” Phil Tufnell: “”A little bit of apres-ski.  Lovely.” Heather Mills: ‘When I heard it involved a ski jump, I thought absolutely no way – that’s insane.’ …and the hilarious dancer Louis Spence: “I’ve never ever done anything like this.” Last year there were loads of injuries.  This year, Dom Parker is already reputed to be in hospital with a bout of concussion and there’s rumour of romance between Stacey Solomon and Steve-O before the show even airs…. we just can’t wait!  As Jump presenter, Davina McCall said: “TV can’t possibly convey the horror of it’! The Jump will run for 8 episodes, starting this Sunday in Innsbruck on Channel 4 at 7pm. Other similar posts: New Celebrity Ski Show Celebrities quit new Snow Sports Show

Verona airport as a ski hub