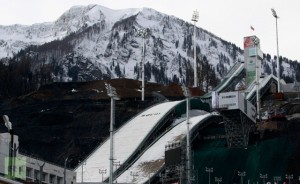 The building of Sochi2014’s RusSKi Gorki Jumping Center is complete.  But it has been a bumpy ride…

Back in February, Russian President Vladimir Putin fired Akhmed Bilalov, vice-president of the Russian Olympic Committee (ROC), after holding him responsible for overspending and for the delay in the completion of the Jumping Center.

Now its construction, in the village of Esto-Sadok on the northern slope of the Aibga Ridge, has come in well over budget, estimated at a staggering $265 million (£163 million/€189 million), as opposed to the original $40 million (£26 million/€30 million).

Bilalov has been accused of misspending up to 15.5 billion roubles ($504 million/£335 million/€387 million), leading him to flee the country and claim that he has been the victim of an attempt to poison him.

The completed project with its Olympic K-95 and K-125 ski jumps has been designed at the junction of two ridges, to harmonise with the surrounding landscape and to protect athletes from sidewinds.  It’s name plays on the abbreviation “Rus” and the word “Ski”, together denoting the English slang word for a Russian person. The nearby “Gorki Gorod” venue will house the Mountain Media Village.

The RusSki Gorki Jumping Center will go down in history as the venue for the first Women’s Ski Jumping Olympic event.  Sochi2014 will be the first time that women have competed in this discipline.

It will also stage the Nordic Combined (ski jumping plus cross-country) event.