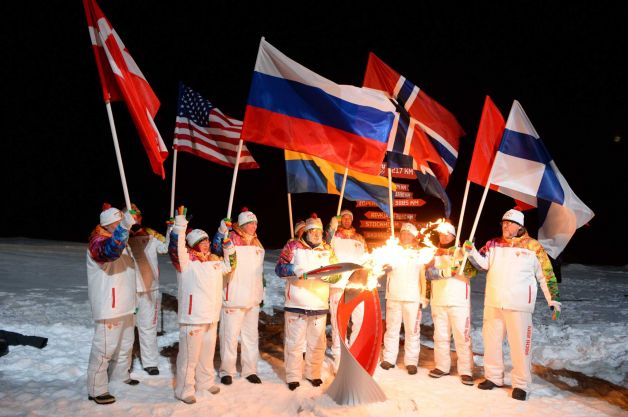 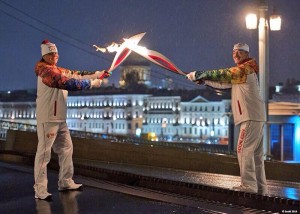 An Olympic ‘torch kiss’ on the drawbridge in St Petersburg (photo: Twitter/@Sochi2014)

As the first month of the Sochi Winter Olympic Torch Relay draws to a close, FamilySkiNews looks at the torch’s progress to date, including a historic visit to the North Pole!

The torch was first lit from the rays of the sun with a special solar igniter back on 29 September in Greece, an historic and ceremonious event we covered in an earlier story here.

The relay then started on Russian soil on 6 October and is taking 123 days in total to cross Russia on what will be the longest torch relay in Olympic history.

The torch didn’t have the most auspicious start, as we reported on Twitter: the torch went out in Moscow’s Red Square on the first day and, rather embarrassingly, had to be lit with a cigarette lighter by a Kremlin security guard, as you can see in this YouTube clip.  It’s really very comical!

But it’s not the first time an Olympic torch has gone out.  It has previously happened in Nagano, in Paris, in Montreal, in Athens, and even on the eve of the Olympic torch relay in London. 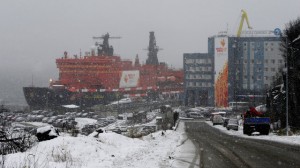 ‘The 50 Years of Victory’ icebreaker carried the torch

On a more positive note, the torch did reach the North Pole successfully – breaking numerous world records as it went.

It was transported for 15 days from Murmansk to the Pole on the world’s largest nuclear-powered icebreaker ship.

It was an epic journey of firsts: the first-ever trip to the top of the world during the polar night; a new Arctic speed record (91 hours, 12 minutes and 1,395 nautical miles covered at an average speed of 15.3mph); the first time an Olympic torch was brought to the North Pole; and the first time a surface vessel made the trip in autumn.

The torch was carried on the ice to the pole by people representing a number of nations who have made a significant contribution to the scientific study of the Artic region.  The ceremony at the Pole concluded with a 3D laser show!  You can watch a short video clip of its remarkable journey here. 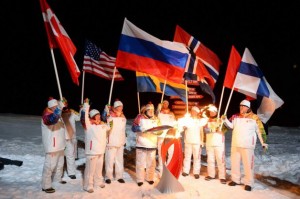 Olympic first: a torch ceremony at the North Pole

As the torch continues on its route, once again this week the torch has gone out, and many Russians are now taking bets on how many more times the torch will go out before it reaches the opening ceremony by the Black Sea on 7 February 2014.

This Thursday (7 November) marks the highpoint of the relay, when the torch will go into space.  It will launch from Kazakhstan’s Baikonur Cosmodrome on 7 November aboard the Soyuz TMA-11M spaceship to the International Space Station.

From there, Russian cosmonauts Sergey Ryazansky and Oleg Kotov will take the Torch on the first ever Olympic space walk.  The torch won’t be lit for its stay in space though, as we explained in our earlier story ‘Olympic torch to go to space’.

After the space tour, the torch will continue on its route, travelling by a variety of means, including car, train, plane, Russian troika and reindeer sleigh.  Before it reaches the opening ceremony, it will also ascend to the top of Europe’s highest peak Mount Elbrus and descend to the bottom of Lake Baikal in Siberia.

When it’s complete, it will be the longest distance a Torch Relay has covered in a single country in Olympic history.