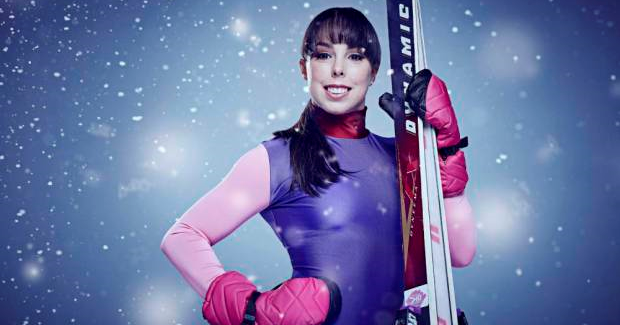 “Surely this is the last series of the channel 4 reality show The Jump?” asks FamilySkiNews, as the third contestant leaves the show injured… and it’s only week 2.

Olympic bronze medal-winning gymnast Beth Tweddle, 30, is the latest casualty.  She’s currently “stable” in hospital following surgery today, after injuring her back by crashing into a barrier during training in The Jump.  According to a family statement after the crash: ” Beth had a fall on the slopes whilst in training for The Jump. She is stable and due to undergo routine surgery on her back.”

Update 8 Feb:  Despite playing it down during yesterday’s show with mention of “routine surgery”, it seems Beth’s injury was extremely grave:  she had surgery last night to fuse fractured vertebrae in her neck and is now recovering in hospital. Early medical indications were positive as Beth is able to move her hands and feet, despite being in a lot of discomfort.  During the operation, a piece of bone was extracted from her hip and used to fuse the two vertebrae that were fractured, as well as pinning them together.  Her parents have said: “It was a scary time for all of us and we’re just very grateful that the operation was a success.” From her hospital bed in Austria Beth said: “Thank you so much for your support and concern. The last 48 hours have been very scary but all the messages have really helped to keep me positive.”

Adlington, 26, who won two swimming golds for Britain at the 2008 Olympics, suffered a shoulder injury and said she was “so sad to be leaving on injury”.

The third casualty is Holby City actress, Tina Hobley, 44, suffering from a dislocated elbow and two fractures to her arm.