Austrian snowboarder Anna Gasser, 27, made history this week by becoming the first woman ever to land a cab triple underflip – that’s an impressive three and a half full rotations. 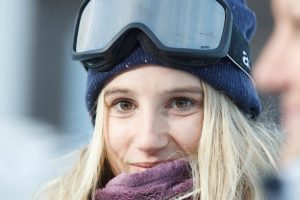 Anna Gasser had casually mentioned to Jenny Jones earlier in the day that she was “thinking about a triple” at the pre-season Prime Park training sessions on home turf at the Stubai glacier in the Tirol.

Then she went and smashed it.

Gasser has been considered one of the most progressive riders on the circuit ever since she became the first female rider to land a cab double cork 900 in 2013.

It’s turning out to be a remarkable year for Gasser. In the last twelve months she’s already won big air gold at the PyeongChang 2018 Olympic Winter Games and at the X Games Aspen 2018. She also won the FIS World Cup Big Air crystal globe for the second season in succession in 2017/18.

This jump follows another record-breaking stunt – just three weeks ago, right at the start of the season, the USA’s 18-year-old snowboarder Chloe Kim, the X Games Aspen 2018’s gold medalist in the Women’s snowboard super-pipe, became the first female rider to stomp a double cork 1080 in the half-pipe in Saas-Fee.