It’s the all important question… what will the weather be like this half-term?  Snow conditions are pretty good right now across the Alps.  But another storm cycle is due to set in on Monday bringing with it some unsettled weather in the run up to the February half-term.

Last year was perfect, with heavy snow followed by warm sunny conditions once half-term began.  As we all cross fingers and toes, let’s look at what we might expect this year?

Conditions at the moment are generally very good, thanks to sunny skies and around 20-70cm of fresh snow, which fell earlier in the week – most notably in the eastern Swiss and Austrian Alps.

This was a blessing, as recent conditions haven’t been great.  Two weeks ago, for instance, the north-western Alpine region had heavy rain and unusually mild temperatures for the season, due to a warm front which brought tropical air and dry Foehn winds across the Western part of Europe. With rain as high as 2700m, even such high resorts as Les 3 Vallees and Les Deux Alpes, were affected. 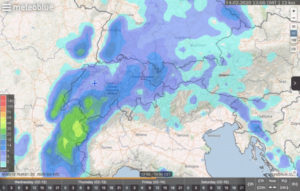 However, as we head towards Monday, things look set to change.

Snow is forecast to fall, with most snow scheduled for the north-west, particularly the northern French Alps, but due to spread right across Switzerland to Austria too. The heaviest dumps predicted Tuesday overnight and on Thursday and Friday.  Around half a metre is predicted, possibly more in north-western regions. The snowstorms will be accompanied by strong winds, meaning a high chance of whiteouts and/or lift-closures.  Avalanche risk will be extremely high too, so stay on piste.

The good news is there should be plenty of fresh snow in the next few days. But it’s currently just too early to predict half-term’s weather… 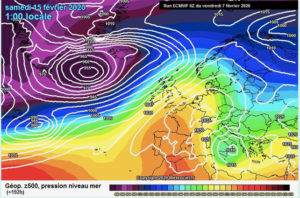 High pressure prediction from the ECMWF for 15 February (Image: meteociel.fr)

There are two possible weather models emerging: either for this week’s unsettled weather to continue, or a return to warm sunshine. If it’s the latter, the temperatures could soar as warm air is pulled in from the south. According to the European Centre for Medium-Range Weather Forecasts, a high pressure may settle over the Alps in time for half-term.  Here’s hoping…

Meantime, the snow’s not just hitting Europe.  In Scandinavia and in America, there’s heavy snowfall at the moment too.