Death of a glacier in Iceland

The glacier of Okjökull in western Iceland once covered an area of 16 square kilometres.  But following the warmest July ever on record, Iceland has since mourned the loss of Okjökul, their first glacier lost to climate change. 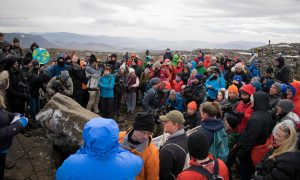 Around a hundred people walked up themountain for the ceremony, including Icelandic prime minister, Katrín Jakobsdóttir, the former UN human rights commissioner Mary Robinson, and a number of local researchers and colleagues from the United States.

They unveiled a bronze plaque on the bare rock once covered by the Okjökull glacier.  The plaque is the first monument to a glacier lost to climate change anywhere in the world.

The Icelandic prime minister, Katrín Jakobsdótti, said: “I hope this ceremony will be an inspiration not only to us here in Iceland but also for the rest of the world, because what we are seeing here is just one face of the climate crisis.” 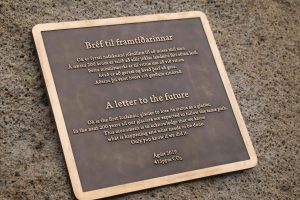 Cymene Howe, associate professor of anthropology at Rice University in Texas remarked: “By memorialising a fallen glacier, we want to emphasise what is being lost – or dying – the world over, and also draw attention to the fact that this is something that humans have ’accomplished’, although it is not something we should be proud of.”

Iceland loses about 11billion tonnes of ice annually. Glaciers cover around 11% of the country’s surface, and scientists fear all of the island’s 400-plus glaciers may be gone by 2200. The ‘Ok’ glacier was no longer a living glacier, but simply ‘dead’ ice.  It was stripped of its glacier status in 2014, as it was no longer moving.  It once covered 16 square kilometres but not is measures less than 0.7 square kilometres.