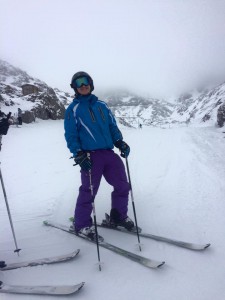 FamilySkiNews.com’s editor, Teresa Fisher, skied Alpe d’Huez with her husband and two sons earlier this season. During her stay, they all took on La Sarenne – one of France’s big skis and reputedly the longest black run in the world.  It was certainly an adventure, in more ways than they were expecting.  Here’s what happened to them…

Rite of passage We first heard about the infamous run – La Sarenne – from a friend, who felt if he could ski this run successfully, he’d made it as a competent skier.  A keen, intermediate skier with property in the area, the Sarenne had become his goal,  the focus behind all his ski lessons.  He went on to ski it for the first time in perfect conditions late last season and published his success widely on social media…

How long?… The next time we heard about the run was in 2013 when a German ski expert, Christoph Schrahe, revealed that a good many resorts lie about their piste lengths to attract more skiers and that Alpe d’Huez was one such resort. 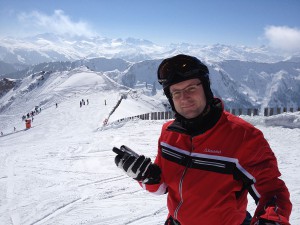 Schrahe, a German lecturer in ski resort management, devised an ultra-accurate method of measuring piste length by using a digital mapping system, GPS and Google Earth to measure the length down the middle of the pistes, following each of the slopes’ twists and turns, as we reported in an earlier story “Does size matter on piste” HERE.

Schrahe’s research has left one question open: is La Sarenne the longest black piste in the world or not? According to Alpe d’Huez it’s 16km long, according to Schrahe, it’s a mere 10km.

Nobody to date has categorically said that La Sarenne is not the world’s longest black piste, though The Telegraph came close recently when it stated that resort designers Montenius claimed the true length to be 10.6km.  Were the rumours true?… we were all keen to go and see for ourselves!

Beware “black” pistes! I’ve already mentioned that there wasn’t much snow at Christmas, in fact there were just 32 lifts open out of a whopping 135 that the resort usually boasts! As is often reported, La Sarenne isn’t as steep as most blacks in the Alps: indeed it’s classified black mainly because it’s extremely long and there are no alternative routes down – once you’ve started, you’re committed until the bottom!  That said, black pistes are always black for a reason which may or may not immediately be apparent.  Perhaps they’re notoriously icy, or prone to massive moguls…

My family are pretty competent skiers so, when we heard through chair-lift-chatter that La Sarenne boasted the best snow in resort and that it wasn’t crowded as many people were intimidated by it, we set off there on our first afternoon – having skied hard all morning to get our ski-legs in. 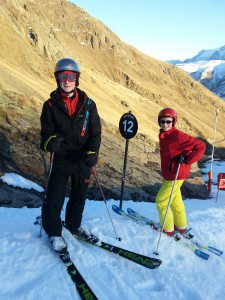 Not much snow at La Sarenne

Three chairlifts later and we stood atop the run. And it’s ‘blackness’ became immediately apparent… the first 200m are positively precipitous, icy and about the width of a double bed.  If you survive that bit (and thankfully we all did!) the rest is pretty much a walk in the park, albeit a long one.  It’s wide and gently sloping, with just one other steep-ish stretch towards the end then a highly-picturesque 5km schuss to finish beside a stream!   There’s really nothing very technical about it at all. It does require a degree of endurance, however – once you start your descent there are no options to bail out. Bear in mind… with a lift-served vertical of 2,230m, it’s one of the world’s top five for size of vertical drop!

Unfortunately, ski conditions were so poor in early January that there were lots of rocks and ice on the slope and so it came as little surprise that my husband came a cropper about half-way-down and ended up completing several kms of the run on his derrière.

Following a visit to the ultra-efficient medical centre, where he was diagnosed with a torn knee muscle (thankfully not his ACL, see our earlier feature on muscular ski injuries HERE), he was put on crutches; drowning his sorrows in the bar; and contemplating how he was going to cope for the rest of the week in an apartment without wifi and having to be the family chalet-maid.

A cosy stop-off Just a short way into the 5km schuss is a charming traditional-style café, bedecked with ancient skiing mementoes, centred around an open-fire. Not only is this stop-off perfectly placed after a long ski, but the hot chocolates here beside the fire are divine.  Highly recommended!

Don’t be late for the last chairlift     Our hot chocolates were so good that we made it to the last chairlift back to resort just in the nick of time. We noticed the lift operator was on the phone and possibly hadn’t seen us getting onto the lift.  “No worries”, I reassured the kids, “they always do a once-around to make sure nobody gets left on.” 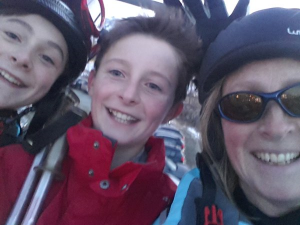 Stuck on a chairlift in Alpe d’Huez!

Well, I should have eaten my bobble-hat as no sooner had we got halfway up the side of the mountain and just past the Alpe d’Huez airstrip than the lift ground to a jiggly halt! The planes were literally whizzing past our ears and people in the camper-van park below were waving cheerfully and laughing at our predicament.

Thankfully there was an emergency number on the piste map (make sure you always carry one and a charged mobile phone!).  After a chilly half-hour, the chairlift cranked into motion again and we were whisked safely to the nearest bar in resort!

Our verdict La Sarenne may well no longer be the longest black in the world or the most challenging ski, but it’s a great ski and what an adventure: who would have thought so much could happen in just one run.  Needless to say, we skied it again the next day, and the next and the next…!

Teresa Fisher was a guest of the Alpe d’Huez Grande Domaine ski area. A six-day adult area lift pass costs €255 per person (approx £187); €199 for a child.  Family passes are also available (online only), if you book at least 7 days before arrival in resort.  The resort also has a special spring offer of one free child’s pass per adult pass.  Further details can be found here: http://www.sataski.com/en/winter/buy-skipass/

Other related posts:
Size matters on piste
Does size matter?
Ski resorts continue to exaggerate piste lengths
Wha’s in a piste?… What makes the Lauberhorn so special?