National Schools Snowsport Week – a brand new initiative from Snowsport England aimed at encouraging more schools to introduce their pupils to snowsports will commence this spring at 21 slopes across England.

National Schools Snowsport Week is being backed by Winter Olympians Aimee Fuller and Graham Bell and sponsored by visit Andorra. It will run at indoor and artificial slopes across the country from 22 – 29 April 2016.

Throughout the week there will be a range of events at different slopes including taster ski and snowboard sessions for all pupils, alternative snow activities such as tobogganing and tubing, and even freestyle or racing taster sessions at some slopes. Some activities will be free and others will be offered to schools at affordable prices. There are also expected to be guest appearances from snow-sports stars and celebrities throughout the week.

Graham Bell, five-time Olympian and presenter of BBC’s Ski Sunday is one of the skiing celebrities backing the scheme. He believes: “There is nothing better than standing on a ski slope, the adrenalin rushing through your body as you start your descent – whether that is in the Alps or on an artificial ski slope. I wish every child could have the chance to give snowsports a go and enjoy that feeling, which is why National Schools Snowsports Week is such a great idea. Not only will children from a range of backgrounds get to give skiing or snowboarding a go, at some slopes there are ski racing taster sessions, so we might even find our next Winter Olympic Champion!” 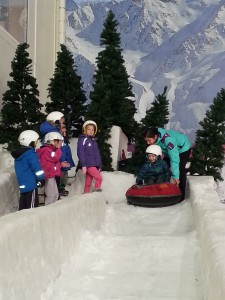 This new national initiative will hopefully bring thousands of pupils into skiing and snowboarding. It’s being backed by Visit Andorra – a perfect sponsor as Andorra is a popular and affordable choice for school trips and activities.  Nestled on the border between France and Spain, Andorra, the ‘Country of the Pyrenees’, is an independent state with an area of 468km², a population of less than 80,000 and more than a thousand years of history. With 65 peaks over 2,000m high and 303 km of ski slopes, its slopes are perfect for schools, families and beginners to cut their teeth with extensive facilities catering to these markets.

The activities at different slopes are open to all school ages and to any school keen to get involved.Schools can join in with whole classes, whole year groups, or even with just a handful of students.

Tim Fawke, Chief Executive of Snowsport England explained: “Skiing and snowboarding are two of the most addictive and exhilarating sports around, and we find most children who give it a go are hooked… we are expecting hundreds of pupils to get involved, and hopefully get addicted.”

You can find more information on how to get your school involved on the National Schools Snowsport Week website.