“Ski jumping or ski flying?  Which is the one for you?”…This somewhat alarming question was posed to me on a recent visit to Slovenia.  My retort “You’re not expecting me to jump, surely?” was more pressing than the obvious question “What on earth’s the difference?…” 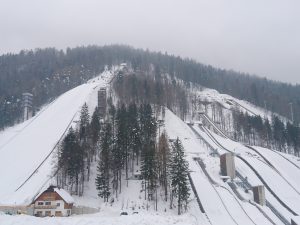 The eight ski jumps of Planica

We were standing at the foot of eight monumental ski jumps in the narrow glacial valley of Planica in North Western Slovenia, just a stone’s throw from the Austrian border, tightly wrapped by the snow-capped mountains of the Julian Alps.

The very name Planica (pron: Plan-itza) is synonymous worldwide with ski jumping, and once again this weekend it will host the Mens’ Ski Jumping Finals – the annual climax to the FIS World Cup and the final hurrah of the season for Planica.  Together with its better-known neighbour, the seventy-year-old ski resort of Kranjska Gora, the two venues have once again this season combined to stage a clutch of major winter sporting events.  Indeed, they’re the only location in Europe to annually stage events in four FIS World Cup disciplines – cross-country skiing, alpine skiing, disabled skiing and ski jumping.

Around 50 competitors are expected to ‘fly’ off the complex of ski jumps here in Planica this weekend (including the favourite, Poland’s Kamil Stoch, who’s already won this winter’s overall World Cup title), but thankfully not me!  I was relieved to learn that it’s just not that simple, you and I can’t just go and book in for a course of ski-jumping lessons.  The locals assured me this sport ran deeper than that. “It’s in the blood.. it takes years and years of practice..”  To hit the biggest hill here at Planica, you have to be over eighteen, male and have over 100 official jumps to your name.  I wasn’t going to argue with them.  However, they did offer me a taster ‘jump’, at the Planica Nordic Centre. 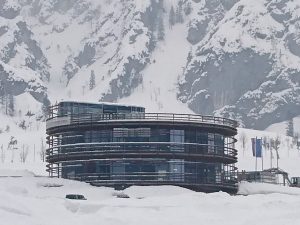 Planica’s striking new museum complex – the Planica Nordic Centre – was built a couple of years ago at an investment of €21 million to celebrate the region’s impressive track record at the epicentre of ski-jumping and cross-country skiing.

A small but exquisite museum within the centre illustrates the history of the sport from the construction of the first ski jumping hill in the 1920s to the celebrated large hill of 1933, the Bloudek Giant, named after its designer, Stanko Bloudek, a sportsman, aeroplane designer and pioneer of flight.  In its day it was indisputedly the largest jumping hill in the world in 1933, and the hill which subsequently gave rise to ‘ski flying’.  The first jump over 100m was achieved here in 1936 by the Austrian Sepp Bradl.

It was the first of many records.  Indeed Planica boasts more ski jumping records than anywhere in the world: in 1994, Toni Nieminen from Finland broke a major ‘flying’ milestone with a leap of 203m.  The current record here is 251.5m (just 2 metres short of the longest jump ever achieved, on the Norwegian Vikersund Hill, set by Austrian Stefan Kraft in2017).  These days Vikersund rivals Planica for the title of ‘biggest ski jump in the world’.  It depends who you ask.  There are a total of eight jumps here, from baby to Bloudek, plus a dedicated ski-flying hill, and they’re open year-round for training. 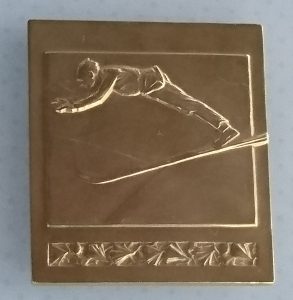 The small but exquisite museum also documents the development and illustrious winter-sporting history of the region; movers, shakers and heroes of the jumping elite; alongside technical developments in ski and clothing fashions.  Modern, minimalist, and family-oriented, parents can take in the finer details of the museum while their kids participate as ski-jumping judges in a special hands-on multimedia exhibit.  The highlight is the ski-jumping simulator.  In just three jumps, I managed to clock a whopping 96m.

If that’s not hands-on enough for you, adrenaline daredevils can have a go at flying in the vertical wind tunnel, or ‘fly’ off the world’s steepest zipline – and the only zipline on a ski jumping hill – which will whisk you breathlessly down 300m in just 40 seconds at speeds in excess of 80kph… that is, if you have the courage to step off the platform at the top (open year-round).  Alternatively, those of us more vertically-challenged can travel up the highest jump by chairlift, and peer over the precipitous leap instead. 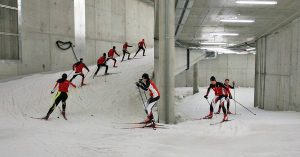 In summer months within the Planica Nordic Centre, there’s an indoor cross-country ski training centre on snow – one of just two in Europe outside Scandinavia.  They simply shovel the winter snow indoors at the end of the season.  Ingenious.  This 800m arena draws national teams from around the globe to the valley to train.  It’s also open to the public at €9 per hour.  In winter months, the space provides hospitality for the various FIS events, and the museum building marks the start-point for the many cross-country ski trails smothering the Planica valley floor. 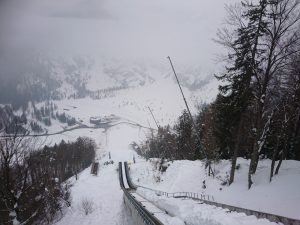 Standing atop the highest jump at Planica

Other facilities within the centre (not open to the public) include a horizontal wind tunnel.  This is a brand new training method, long used in aviation but only recently introduced to the sport of ski jump training – essentially the athlete dangles by the neck in full ski-jumping regalia to simulate the take-off, and examining the force-time characteristics of the wind in differing strengths and angles.  “It’s all about the angles” I’m assured.

Which reminds me…in case you’re still wondering about the difference between ski jumping and ski flying?… it’s purely semantics: one is for jumps less than 160m the other is for jumps over 160m.  I think I’ll just stay on this sunny terrace, sip the champers, and see how the experts do it…

Teresa Fisher travelled courtesy of Crystal Ski Holidays (crystalski.co.uk; 020 8610 8123), who offer a week’s half board at the four-star Ramada Hotel in nearby Kranskja Gora, from £589per person including flights from Gatwick and transfers departing during January 2019. Departures from all major UK airports available (at a supplement starting from £25).

Happy St Patrick’s Day from all the team at FamilySkiNews.com