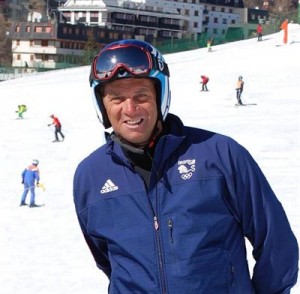 Would you like to be taught to ski by five times Olympian and qualified ski instructor Sir Steve Redgrave?!

Or would you prefer to see how fast you can ski against professional ski racers?

If you answered ‘yes’ to either of these questions, then join the event on 5 October at Snozone in Milton Keynes.

It is being organised as part of the Slide2Sochi Olympic themed road-show and promises to be a great day out for all the family – even those who have never tried skiing or snowboarding before.

And rest assured, not only is Sir Steve Redgrave president of BASI (British Association of Snowsports Instructors), but he is also a qualified BASI instructor. (BASI instructors teach recreational ski and snowboard enthusiasts at snowsport centres and dry ski slopes in the UK as well as at ski resorts in 24 countries world-wide.)

As well as free taster sessions, which are suitable for complete beginners, you can also sit in an Olympic Bobsleigh with members of the GB Bobsleigh team. 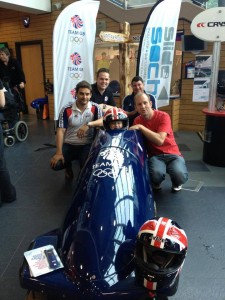 Come and meet the GBBobsleigh team

The more competitive can test their speed against some of the UK’s up and coming top skiers who train at Snozone on a weekly basis: Jess Anderson and Megan Riley will be setting the times on the day.

And, to keep everyone in the mountain mood, there will be an après-ski area featuring the High Society Band playing Tirolean music.

“My three children love everything about the mountains,” he continued. “My eldest wants to go as fast as possible and has done some ski racing; my next daughter is the complete opposite, very stylish and sedate and my son loves snowboarding and tries to get as much air as possible.”

“I am delighted to be part of this initiative to help introduce new people to snow sports and it’s also a great way to show our support for our winter Olympic team.”

The Snozone Slide2Sochi event is being held in conjunction with Crystal and the Tirol Tourist Board.  It starts at 11am on Saturday 5 October.  Admission is on a first-come first-served basis and taster sessions can be pre-booked by calling 0871 222 5673.

Other related posts:
Slide2Sochi Roadshow
Ski lessons for a fiver
The coolest halfterm outing
Fancy having a go at skiing or snowboarding?
New ‘Go Ski Go Board’ campaign

Other recent posts:
Crystal Ski’s new social skiing service – how it works
Skiing in the desert
Crystal reintroduces ski hosting in France
Happy days in the Hautes Pyrenees
September snow in the Alps