007 Walk of Fame opens in Switzerland

The world‘s first 007 Walk of Fame opens today atop the Shilthorn mountain in Switzerland. The Schilthorn is part of the ski area of the Swiss resort of Mürren and has been associated with 007 ever since the 1969 movie On Her Majesty’s Secret Service, starring George Lazenby as Bond, escaping from the top of the Schilthorn in an epic descent.

This weekend the 007 Walk of Fame opens on the Schilthorn, honouring the many stars both in front of and behind the cameras during the making of that movie. It is situated at the top of the mountain, en route to the Piz Gloria 360-degree revolving restaurant at 2970m (9744ft), where you can start your day with a James Bond 007 Champagne Breakfast Buffet overlooking the Eiger, Mönch and Jungfrau mountains.

Everyone will be commemorated on an information board with their photos, signatures and handprints in steel, as well as a personal message describing the importance of the film to their career and their memories from the time on the Schilthorn. Other celebrities from the world of James Bond are also there on the summit. Together the various panels form the 007 Walk of Fame – a unique tribute to those legendary 007 films.

Also at the summit, there’s the Bond World 007 – an interactive exhibition, showing scenes from the movie as well as general background information; a tour giving insider glimpses into the filming of the Bond movies; a small cinema showing clips of the movie, plus even a chance to ride in the helicopter simulator in the original chassis of a decommissioned Air Glaciers Alouette III.

Bond, of course is no stranger to skiing and boarding. Several films have contained some dramatic mountain scenes, which you can see by clicking HERE to view our story commemorating the fiftieth anniversary of the first James Bond film, Dr No. 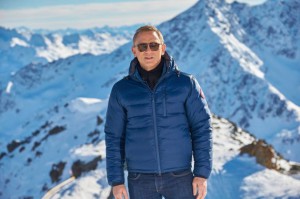 007 in the Austrian Tirol

All eyes are back on Bond again this year, as Daniel Craig has been filming the latest 007 movie – Spectre – in the Austrian Tirol, in the resorts of Sölden and Obertilliach, as we reported in an earlier post HERE. We have yet to discover if he’s on skis or snowboard in the film, although we do know he hurt his knee during filming which indicates he almost certainly will be on one or other!

Not much longer to wait now – Spectre will premiere on 25 November 2015… Now, that’s what we call perfect timing for the next ski season!