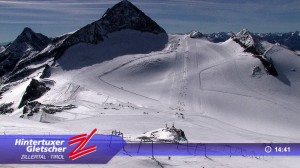 Winter must be on its way… as Autumn sets in and people start to turn their minds to snow sports, so some of the glaciers are opening in the Alps.

There are currently ten ski areas open in the northern hemisphere, five of which are in the Austrian Tirol: along with year-round Hintertux, the Piztal glacier opened ten days ago and the Stubai, Kaunertal and Sölden ski areas opened at the weekend.  Also in Austria, but not in the Tirol, the Mölltal glacier is also open.

The other areas open in Europe are Passo Stelvio and Val Senales in Italy and the Swiss resorts of Saas Fee and Zermatt.

Not only have the recent snow flurries across the Alps this month have got everyone planning their winter holidays, they have benefitted the Tirolean glaciers, where up to 15cm of new snow has fallen in recent days.

There are no ski areas open in France nor in North America, although there was a good dusting of snow in Colorado, California and British Columbia this weekend, as we reported here. 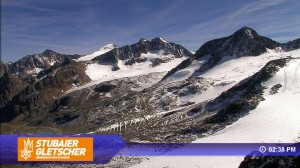 It’s almost ‘glacier party season’ in the Tirol too as more venues gear up for their openings in October.  These include Kaunertal, which will officially celebrate its opening with a weekend of partying and ski and boarding competitons from 11-13 October and Sölden, also on 12-13 October, with its First Snow Glacier Opening.  Both venues will offer the chance to test the latest ski and snowboard equipment, as will the Pitztal, which will be celebrating with the Tirol’s highest glacier festival when it opens on 26-27 October.

The Tirol is also the venue for the first FIS Ski World Cup race of the winter – on the Rettenbach glacier above Sölden from 26-27 October.

To keep updated on forthcoming events in the Tirol region, check out their website or Facebook page.

(Images are from live webcams in Hintertux and Sölden today.)

Autumn snowfalls in USA and Canada