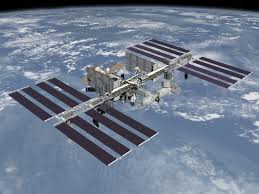 It’s official.  The Olympic Torch will travel into space at the Sochi Winter Olympics in 2014, where it will be taken on an historic spacewalk.

It seems only fitting that Russia will be the first country to send the Olympic Torch into space.

After all, they were the first country to send a man into space, over 50 years ago, when Yuri Gagarin orbited the earth in 1961, as we recently reported in our feature Olympic Torch to go to Space.

An Olympic Torch was presented to spaceship captain Mikhail Tyurin.

The Olympic Torch Relay is scheduled to start in Sochi on 7 October this year.  It will be the longest in the history of the Winter Games, as we reported in an earlier story here.

The Torch will launch from Kazakhstan’s Baikonur Cosmodrome on 7 November aboard the Soyuz TMA-11M spaceship.  It won’t be lit, for safety reasons, and will travel around 400km to the International Space Station.

From there, Russian cosmonauts Sergey Ryazansky and Oleg Kotov will take the Torch on a space walk.  They are currently training at the Yuri Gagarin Centre.

“This spacewalk by two Russian cosmonauts with the Sochi 2014 Olympic Torch will be an historic moment in the history of the Olympic Torch Relay.” remarked Chernyschenko at the signing of the contract.

“I want to thank the Federal Space Agency for its support which will enable us to take the Sochi 2014 Olympic torch Relay to the final frontier,” he continued.

Popovkin, head of Roscosmos added: “Conducting a spacewalk with the Olympic Torch is an unprecedented event in the history of the Olympic Movement and the world of astronautics.” Its in-orbit delivery and the spacewalk by Russian cosmonauts will be a bright new page in space history.”

Following the historic space walk, the torch will return to earth with cosmonaut Fyodor Yurchikhin, and the same torch will then be used to light the Olympic Flame at the Opening Ceremony in Sochi on 7 February 2014.