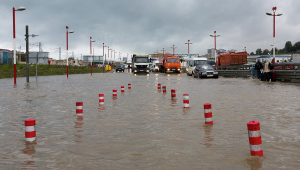 Russian authorities have declared Sochi in a stage of emergency, following flooding and mudslides caused by torrential rainfall in the area.

The severe weather is forecast to continue today.

Some residents in the Black Sea resort of Sochi, host city of the 2014 Winter Olympic Games, have been evacuated from their homes as rivers in the region burst their banks.

Roads are jammed, some flights into the regional airport cancelled and power was switched off in some part of the city to avoid electrical danger.

This is the second incident of its kind this year, causing Olympic site construction workers to down tools.  Sochi was in a state of emergency in March, also due to flooding.

The floods coincide with a visit from the International Olympic Committee (IOC) Coordination Commission for Sochi 2014 for their last scheduled inspection of preparations for the Games, which commence on 7 February, just four months away.

It is the latest in a string of events that have hampered the Sochi developments.

Back in February, Russian President Vladimir Putin fired Akhmed Bilalov, vice-president of the Russian Olympic Committee (ROC), after holding him responsible for delays in constructing the RusSki Gorki Jumping Center.  The project was finally completed in July, seriously overbudget, as we reported at the time here.

Then there’s the ongoing issues against Russia’s anti gay law which, since it was signed by Putin in June, has led Gay Rights campaigners to call for the 2014 Games to be boycotted or moved from Sochi, which has drawn support from politicians and celebrities alike.

Just last week, on a visit to the inauguration of Sochi’s new Olympic University, Russian President Vladimir Putin admitted that there were some “ongoing glitches and delays in time frames” in the preparations for the Games.

Let’s hope they get a move on!… there is no flexibility in the schedule!  There are four short months until the Winter Olympics opening ceremony, and just two days until the Olympic torch is lit.   The official Torch Relay starts on 7 October.

Ski offers in Reading this weekend