Flooding in the Alps – the massive clean-up begins 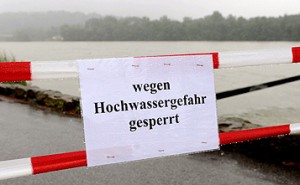 Many roads in the Alps are currently impassable

With news of widespread flooding in Central Europe this week, anyone with a forthcoming holiday to Austria and Switzerland may well be anxious!

The flooding is due to heavy rainfall – up to a month’s worth of rain in just two days!  The problem has been exacerbated by vast quantities of melting snow – the downside of an excellent ski season!

Many rivers are at dangerously high levels (especially along the Danube in Eastern Austria) and ferries and river cruises have been cancelled or rescheduled in many instances.

Hundreds have been evacuated from their homes and, so far, over 15 people are reported to be missing or dead, in Austria, Switzerland, Germany and the Czech Republic.

Parts of Austria have been hit with some of their most severe flooding in years. Among the worst hit areas are the provinces of Salzburg, Vorarlberg and the Tirol in Austria. Many alpine roads have been closed, due to flooding and mudslides – including routes to resorts of Saalbach (near Zell-am-See), Hopfgarten and Westendorf (near Kitzbühel).

Parts of Southern and Eastern Germany and the Czech Republic are also suffering.

And there are also flood alerts in alpine regions of France and the Pyrenees.

The BBC have compiled some dramatic images of the flooded region here.

But hopefully now the tide is turning as the rain subsides and a massive clean-up operation begins in some regions.

Local Austrian authorities have reported: “Luckily the situation is fast improving in the western parts of Austria… the waters are slowly receding and cleanup crews are hard at work.”

How will this affect your holiday?

If you’re holidaying in the area right now, you will invariably find boat and train timetables in array (yes, even in parts of ultra-punctual Switzerland!); and extensive road diversions in place.

If you’re at higher altitudes –  away from the valley floors where the mighty Rhine, Rhône and other major rivers are fed by myriad alpine streams – your holidays should be relatively unaffected… except more rain means more snow at altitude, adding to the huge amounts still remaining above 2,500m, meaning increased avalanche risk, which was already very high! 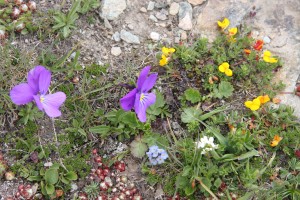 Normally in June, the Alps are adorned with meadow flowers, not carpets of snow.

Conditions remain very unstable at altitude, with increasingly high avalanche risk as the warm Föhn wind arrives and temperatures rise over the next few days.  Not good news if you’re planning a mountain hiking holiday this month!

If you’re a FamilySkiNews reader out in the Alps at present, do let us know what conditions are like and how the flooding has affected you.  Please also send us your images to admin@familyskinews.com.