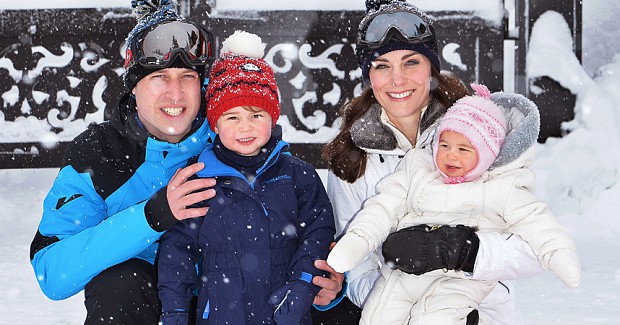 The Duke and duchess of Cambridge have been holidaying with Prince George and Princess Charlotte in the Alps.

Amazingly, the trip was kept a secret, in order to keep the children out of the public eye, and it certainly worked… only on their return did Kensington Palace release a series of photos, showing Prince George’s first experiences of playing in the snow, and baby Charlotte all dressed up in white.

A spokesman at Kensington Palace said: “This was their first holiday as a family of four and the first time either of the children had played in the snow. It was a very special and fun short holiday for the family.”

The royal family are no strangers to skiing. William made his skiing debut to Austria in 1991 with his mother, the late Princes Diana, and with his brother, Prince Harry, when he was just eight years old, during the half-term break.   It is reported that William was initially a nervous skier while his younger brother, 6, was more confident. 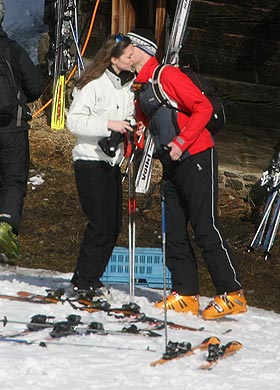 The royal couple also went on a number of ski trips together before marrying. Indeed their first public kiss was on a skiing holiday in the Swiss resort  of Klösters in January 2006.  We also reported on William and Kate skiing in Meribel in an earlier story HERE.

The Cambridges spent part of their honeymoon in a ski lodge near the resort of Lake Louise in Canada, as we reported in an earlier story HERE and, when they designed the Middleton coat of arms at the time of the royal wedding, it included a reference to their love of the mountains. You can see the crest and read more about the skiing element by clicking HERE.

The beautiful and carefully-staged photos of this recent family ski holiday to the Alps (taken by John Stillwell) make the family look like supermodels.  They certainly chose the right time to visit the Alps, while the snow is at its best for the season.  However, the photos show no clue of the family’s whereabouts.

It leads us to ask three questions: 1) we wonder if they were staying in Verbier, as Prince William’s uncle, Prince Andrew, owns property there? 2) we wonder if they took their son out of nursery during term-time! 3) did you see them on your family ski holiday? If so, do tell!