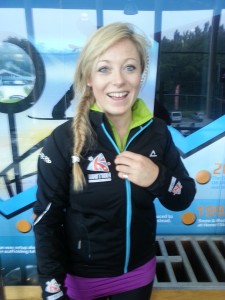 FamilySkiNews met up with Britain’s top female Ski Cross racer, Emily Sarsfield, at The Snow Centre this weekend.  She was handing out the trophies to some of the country’s top schools ski racers (and possible future ski Olympians?) at the British Independent Schools Ski Racing Indoor Championships, as we reported earlier in our story Racing on indoor snow.

Emily is an ambassador for British Snowsport’s latest nationwide campaign, Go Ski Go Board, which was launched earlier in the month.  This new scheme is hoping to encourage more children to get involved with skiing and snowboarding, inspired by such snowsports athletes as Emily, in the build-up to the Winter Olympics in Sochi 2014.

Her event – Ski Cross – was introduced to the Games in Vancouver in 2010. In a ski cross race, four competitors race against each other over a specially constructed course that includes jumps and turns.  Emily took it up seven years ago, having started out as an alpine skier.

The children ski-racing at The Snow Centre yesterday definitely struck a chord with Emily, who started skiing when she was little, on annual family ski holidays to the Alps.   We took the chance to hear her story here:

FSN: What are your first memories of skiing?
Emily: I must have been age zero when I was just left sitting in a buggy on the slopes with my nanna.   My parents were very sporty and my dad was hooked on schools skiing.  I was first put on skis when I was about two or two-and-a-half.  When I was growing up, the highlight of our year was always the annual ski hols to the mountains.  We used to go to Austria a lot, sometimes to Italy… but never to the big well-known resorts.  They were the best hols ever.

FSN: How and when did you get into ski racing?
Emily: I didn’t start racing until I was twelve.  Dad ran the local schools’ annual ski trip and the schools’ ski team.  One day he needed extra people for the team so I was put in.  I loved it so I joined a local race club.  Within a year, I was in the English Schools Team and the British Children’s Team.  Then later I was in the university team. 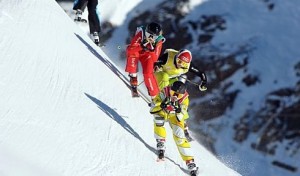 FSN: Why did you make the switch from alpine skiing to Ski Cross?
Emily: I was competing at the World University Games and someone suggested I try Ski Cross.  I said “Absolutely no chance!… those guys are idiots.”  Anyway, I was persuaded to try it just once…. from the moment I pushed out of the start gate, it was just like being on a rollercoaster.  It was so much fun.  I couldn’t wait to get to the top and do it again.  And I’ve just been doing it ever since…. it just gives me so much fun and enjoyment.

FSN: You had a serious knee injury four years ago.  How will that affect your training in the build-up to the Olympics in Sochi?
Emily: Yeah.. my knee is my niggle.  I think most people have something, and that’s mine.  I just have to manage it and adapt my training.  I can’t run or jump…  I’ve actually just finished a big fitness phase of my training, building strength with lots of heavy lifting.

FSN: What next in your preparations for Sochi?
Emily: It’s so exciting.  I’m heading out to Saas Fee this Saturday where I will train for ten days on and ten days off until November, and I’m also training at Stubai. 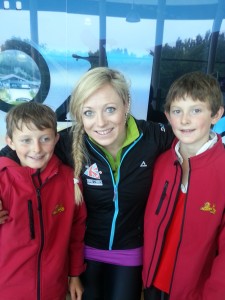 FSN: As a newly-appointed ambassador for Go Ski Go Board, what exactly does that involve?
Emily: I’m travelling around ski centres in the UK promoting skiing to young people.  I think the ‘ski for a fiver’ offer is the best part of it – it means people who couldn’t normally afford it can now have a go at skiing or snowboarding.  I really hope I can encourage lots of people to get involved in snow sports.  That’s why it’s so great to be here today, with all the kids ski racing, as they are the future of our snowsports.