Happy days in the Hautes Pyrenees

Planning your next family ski break?  Be sure to consider the Haute Pyrenees!   Our FSN reporter Briony Key points out some fun family locations in the region: 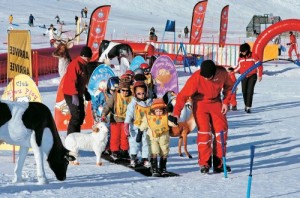 Family fun in the Haute Pyrenees

The Brits have a long love affair with the French Alps, but we’re happy to report that the Haute Pyrenees also has much to be proud of… and it provides plenty of powder for your pound!

There are also regular flights from London to Lourdes and Toulouse, transfers to all resorts and plenty of accommodation options to suit all your family needs, from boutique hotels to apartments.

Here’s a round-up of some of our favourite resorts: 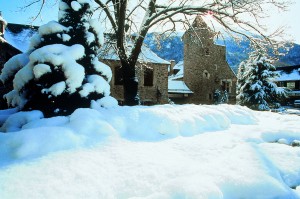 Saint-Lary
Awarded the ‘Family plus Mountain’ label, Saint-Lary certainly lives up to its reputation – offering the warm and friendly ambience of a Pyrenean village as well as accommodation close to the ski runs and in the village centre (where a cable car provides access to the ski area).

There are 55 ski runs (mostly blues), with some long runs including the 3.6km Mirabelle piste.  There’s also a mogul and slalom stadium, a snow park (with sound system) and a half pipe to keep your teenagers amused, plus three mountain restaurants for when you all run out of steam!

Cruisy blue runs for all the family to enjoy

The wide gentle slopes are ideal for improving turns, and there are plenty of blues to cruise on.

There are two beginner areas and a free ride area, but the biggest treat for me was the chance to hitch a ride on a piste-basher and to see the slopes from a totally different perspective. 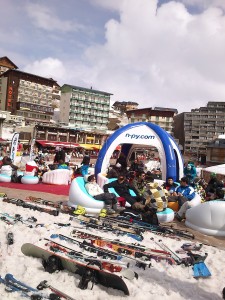 There are 70 runs to choose from, with two beginners’ areas (with three moving carpets). The picturesque 100-kilometre ski area comprises plenty of green and blue runs plus five mountain restaurants.

Le Grand Tourmalet is on many advanced skiers ‘to do lists’, as you can ski and snowboard from the top of the Pic du Midi. 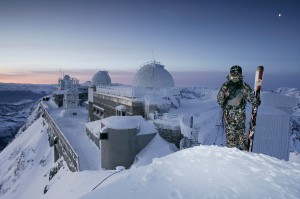 Atop the Pic du Midi at dusk

I opted instead to check in to the observatory. It sits on an isolated summit, separating France from Spain.  At an altitude of 2,890 metres, you can imagine the awesome views, and an overnight stay gives you the chance to know more of its incredible astronomy work. 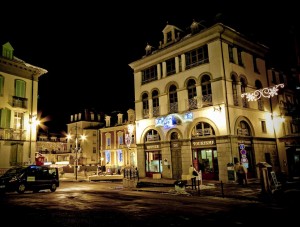 Cauterets
This village oozes character and charm, with its stylish belle–époque buildings and makes a great base for skiing as well as exploring the Pyrenees National Park.

Ideal for beginners, (with two devoted areas and a moving carpet), there’s also some great off-piste, and an Oakley-sponsored freestyle Park – the first of its kind in the Pyrenees, which opened in 2012, as we reported previously here.

For those wishing to try cross-country as well as alpine skiing, the scenic Pont d’Espagne cross-country ski area lies within the park, and the Le Cirque du Lys downhill ski area (with 36kms of pistes) is conveniently accessed by cable car from the village.

Me, Me, Me…
So what about ‘me’ time for parents?Thermal waters flow through this entire region, so the whole family can relax and unwind in the rejuvenating waters. 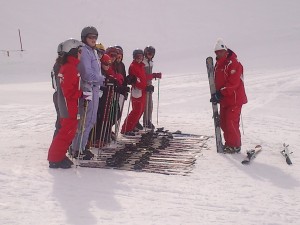 Learning to ski in Cauterets

Many centres have special areas and water activities for children, and treatment programmes to make sure everyone’s ‘Tigger Factor’ is back up to speed for the next day on the slopes.

Check out the Sensoria Spa in Saint-Lary, the Balnéa spa in the Loudenvielle valley (close to the Peyragudes resort), Les Bains du Rocher in Cauterets and the Spa Aquensis in Bagnères de Bigorre, close to Le Grand Tourmalet.

Other action-packed activity options for non-skiers in your family include scuba diving under the frozen lake at Piau Engaly; ice climbing in Gavarnie; paragliding tandem flights; snow shoes walks to discover animal tracks, nights in an igloo, dog sledding…and more.

For further information on skiing and other winter sports in the Hautes-Pyrenees region, check out www.pyrenees-holiday.com.

Stay with Ski Collection at the 4-star Le Clos Saint-Hilaire ski apartments in Saint Lary (with gym and sauna), located in a quieter area outside the resort centre.  In Peyragudes, the traditional-style Le Hameau de Balestas is located on the Peyresourdes side of the resort, and has an indoor heated pool, sauna and Jacuzzi.

Prices start from £99/£127/£246pp for 7 nights (self-catering) in low/medium/high  season in Le Clos Saint Hilaire; or from £79/£112/£231pp for 7 nights (self-catering) for Le Hameau de Balestas in low/medium/high season.  Both packages are based on 5 sharing a 2-bed apartment (sleeps 6), and includes return Eurotunnel crossings with free FlexiPlus upgrade.  Acccommodation only options are also available.

And one final top tip from Briony – the Stansted flight to Lourdes leaves very early, so I opted for a night at the Radisson Blu Hotel. It adjoins the airport by corridor, and makes getting up that little bit easier. There’s a nice pool, gym and spa, plus a choice of two restaurants and the quirky Wine Angels Tower and Bar, where acrobatic wine angels select your chosen tipple from the 13m high tower.

September snow in the Alps