Watch Eddie the Eagle movie and win a ski holiday

If you didn’t get to see the new Eddie the Eagle movie over the Easter holidays, make it a treat for your kids over the summer. It’s a great feel-good film for all the family to enjoy.

Eddie the Eagle tells the story of an unlikely hero, British plasterer-turned-ski jumper Michael “Eddie the Eagle” Edwards, who captured the world’s imagination and achieved world renown when he went to the 1988 Winter Olympics in the Canadian resort of Calgary to ski jump for Britain against all the odds. 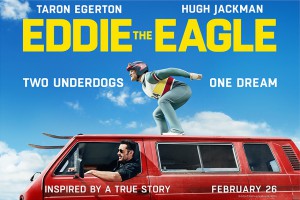 Michael “Eddie the Eagle” Edwards’ story is a tale of great courage and bravery against adversity. As a child in calipers from a working class background, he was told he’d never succeed as a sportsman, but Britain’s most lovable ski jumper was determined to prove everyone wrong and to become an Olympian.  He knew he wouldn’t win any medals; for “Eddie”, it was all about the taking part.

The film marks his first attempts on skis when he was just 13 years old. Within four years he was racing with the national team.  However, as he couldn’t afford lift tickets, he switched to the cheaper sport of ski jumping.  Eighteen months before the 1988 Olympics, at the age of 22, he decided to take time out from plastering and follow his childhood dream of competing in the Olympics. Here’s the trailer:

It is hard to believe that it was over a quarter of a century ago that Eddie the Eagle jumped at the Winter Olympics. Here at FamilySkiNews we remember watching him jumping on the television, and the nation going crazy.  Some of the Calgary footage is merged into the movie. Here’s a clip comparing the distances of the 1988 Olympic champion Matti Nykaenen’s winning jump and Eddie’s jump:

He was a complete underdog and, in many ways, an embarrassment to the establishment.

His appearance in Calgary was met with opposition from those who thought he was making a mockery of the sport – he’d had very little training, had had to borrow kit from other teams and jumped a meagre distance compared with the other athletes.   His performance earned him a number of less-flattering nicknames:  Crazy Eddie. Unsteady Eddie. The Flying Plasterer.  Slow Eddie. Mr Magoo on Skis.  The Abominable Snowman.  A Lovable Loser. The Unconquering Hero…

So he hadn’t won any medals in Calgary– in fact, he’d finished last.  But he had won people’s hearts, thanks to the story the press wrote for him: a dorky plasterer from Cheltenham who took to the slopes in his thick-rimmed glasses, who made it look like he had no idea what he was doing (although he must have had immense courage, steeliness and tenacity).  It’s a great story for a film!

Eddie is played in the film by Welsh actor Taron Egerton, who leapt to fame in Kingsman: The Secret Service. He’s joined by a strong supporting cast which includes Hugh Jackman (‘Wolverine’), Jo Hartley (‘This Is England’), Tim McInnerny (‘Blackadder’), Keith Allen (‘Robin Hood’), Iris Berban (‘Rosa Roth’) and Rune Temte (‘The Last Kingdom’), Christopher Walken (‘Catch Me If You Can’) and Jim Broadbent (‘Bridget Jones’ Diary’).  The music in the movie is by Gary Barlow from Take That.

It is filmed in various alpine locations including Garmisch Partenkirchen and Oberstdorf in Germany, and Seefeld in Austria; the mountains are shown in all their grandeur on the big screen, and the precipitous scenes from atop the ski jumps make you grip your cinema seat!

Eddie himself says of the film: “I never thought a film would be made about my life, as they’d already made ‘Cool Runnings’, a film about the  Jamaican bobsleigh team back in the early mid 90s and I thought ‘They won’t make another film about the same Olympics’ – but they did, and it’s wonderful.”

“I was exemplifying that whole Olympic spirit. I was this tiny little David of a country against these Goliath nations of ski jumping and people saw it and thought: ‘Wow! This is what the Olympics is all about; this is what it should be all about.’.…  I came from GB I had no money, no snow, no ski jumps, no training and no equipment and yet still, inside 20-22 months, there I was at the top of Olympic ski jumps in Calgary being Britain’s first ever ski jumper.” 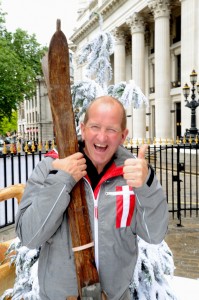 The film is a fictionalised account of his story – the basic elements are all there but with some modifications. For instance, his father is portrayed as being against Eddie’s antics on skis, while he was totally supportive of him.  Also, in the film, Eddie is aided reluctantly by the American alcoholic former ski-jumper Bronson Peary (an entirely fictional character, brilliantly played by Hugh Jackman).  In fact, Eddie couldn’t afford his own coach, but enlisted the help of around 20 different coaches during his unconventional training.

The film’s producer, Matthew Vaughn, said: “Audiences will no longer think of Eddie the clown but as Eddie the Hero.”

There’s no denying, both the film version and the real-life story of Michael “Eddie the Eagle” Edwards are uplifting, inspirational tales of derring-do, of one man’s refusal to accept defeat.

Through sheer passion and determination, he realised his childhood dream and became one of the world’s most inspiring winter sports athletes.  Twenty eight years later we’re still talking about him and he remains an excellent ambassador for snowsports in the UK.

Hurry and book a seat online at www.myvue.com cinemas to see “Eddie the Eagle” and you too might find yourself soaring like Eddie the Eagle, as your name will be entered into a prize draw to win a skiing holiday to Calgary and The Canadian Rockies.

“Eddie” Edwards was one of the mentors on Channel Four’s TV series, The Jump. See HERE for a FamilySkiNews feature on the show.

Other related posts:
Ski Jump crash
Snow in London in July
Try The Jump’s sports for yourself in the Austrian Tirol
Gold medal for partying
Spend the night at the top of a ski jump
Eddie the Eagle ‘skiing’ Everest for charity

The other side of St Anton