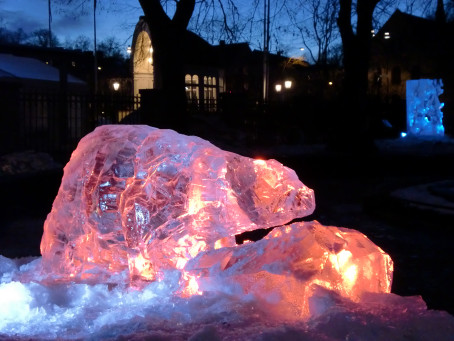 The city of Uppsala is holding a Festival of Ice this week in the Stadsträdgården (City Park) and FamilySkiNews’ copy editor, Teresa Fisher, has gone out to Sweden to report on the event.

It is the nation’s largest display of ice sculptures in a city setting, featuring 14 artists, and using ice from the Torne river in Jukkasjärvi, Lappland.

The sculptors come from across Sweden, and also from Bulgaria, Holland and the UK. You can watch them in action – with their various power saws, ice chisels and iron bars – and watch their magnificent sculptures gradually emerge out of the gigantic blocks of ice. 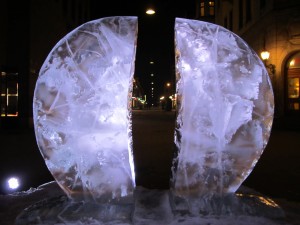 The park is especially scenic by night, when the sculptures are illuminated in the park and across the city.

Also in the park there’s a special playground built out of ice, and ice-skating on the Svandammen (‘Swan’) pond, a tradition that began in the late 19th century.  Uppsala’s figure skating clubs are hosting ice shows on the pond, and there’s also free ice-skating at Studenteras (the Students’ Athletic Stadium) from 2-4pm tomorrow. 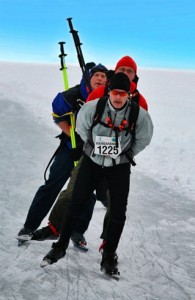 Earlier in the week, the world’s longest annual skating race on entirely natural ice, the Vikingarännet (‘Viking Run’), was staged as part of the Ice Festival.  The race runs for 80 kilometres from Uppsala to the Swedish capital, Stockholm, along an ancient Viking trading route.

Vikings used to skate – using skates made from bones attached by leather thongs.

Nowadays the race attracts over 2,000 skaters, including an increasing number of overseas competitors, for its three main events: the full 80 kilometre race; a 50-kilometre route called the Vikingaturen; and  a 35-kilometre Tjejrännet (‘Run of the Women’) – each across frozen lakes and canals to Stockholm. 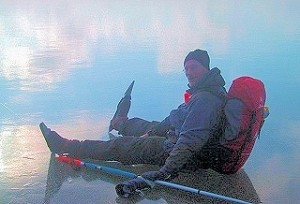 Wild skating – how not to do it!

Long distance skating, also called wild skating, trip skating, tour skating, Nordic skating (and in Swedish “långfärdsskridskoåkning”) is currently a growing sport inSweden.  The region around Stockholm boasts some of the world’s best conditions for the sport, thanks to the large number of small and sizeable lakes in the region – most of which are frozen from November/December until March/April.