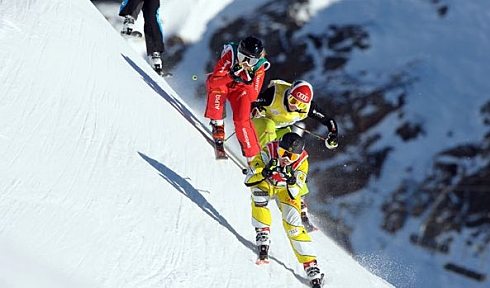 Some of the FamilySkiNews team are in the French resort of Val Thorens, part of the Les 3 Vallees ski area, to see the Audi FIS Ski Cross World Cup.

The Ski Cross World Cup is a brilliant spectator sport. The races consist initially of timed descents on a course which includes jumps, rollers and banks. But the real excitement is when skiers start simultaneously for the the knock-out rounds.

The first Ski Cross World Cup of the season was in Nakiska, Alberta, in Canada on 8 December.  It was dominated by the Swiss who placed two ladies and two men in the final heats and landed three of the six podium spots.  This included 20-year-old Swiss Fanny Smith, who was undefeated in any heat and went on to win the event, remarkably after almost a year off due to reconstructive knee surgery. 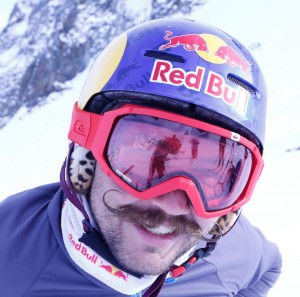 Filip Flisar with his trademark moustache

The second event of the season took place beneath brilliant blue skies in Telluride, Colorado (USA) on 12th-13th December.  It was a weekend of nail-biting racing, with incredibly tight heats, stunning overtaking and several photo finishes.  Once again, Fanny Smith won top slot in the women’s racing, with Filip Flisar of Slovenia clinching the men’s event.

Today in Val Thorens, the qualifying races will be taking place.  Conditions are less than ideal – there is no shortage of the white stuff but, with incessant snowfall for nearly 3 days now, visibility is very limited.

Nonetheless, the world’s best ski cross racers should all go head-to-head once more later today, in a discipline which demands a racer to excel in every skill.  It promises to be a remarkable show of skiing prowess.

Names to look out for in the men’s event include Canadian Brady Leman, Swiss Armin Niederer, and Frenchman Jean Frederic Chapuis as well as Filip Flisar.  In the women’s event, French superstar Ophelie David, Swedish Anna Holmlund and Canadian Kelsey Serwa are all hoping to oust Fanny Smith from the podium this week.

Click back soon for our report on how they all get on.   In the meantime, here’s a little teaser to whet your appetite for what’s to come in Val Thorens in the next 24 hours: