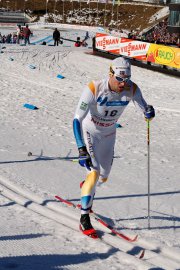 Pippa Middleton – Prince William’s sister-in-law and the younger sister of Catherine, Duchess of Cambridge – took part in the 88th Vasaloppet cross-country ski marathon in Mora, Sweden today.  She completed the 56-mile race in an impressive 7 hours 13.36 minutes, finishing in 412th place in the women’s line-up of skiers.

A veritable race of superlatives, the Vasaloppet is the oldest, the biggest and one of the longest cross-country ski races in the world.  More than 15,800 competitors turned out for the race, and the winner, Swede Jörgen Brink claimed his third consecutive victory in just 3 hours 38.41 minutes – the fastest time ever recorded.

Pippa was accompanied by her brother James Middleton, who clocked a time of 6 hours 47.27.  They were both competing to raise funds for the children’s charity Magic Breakfast, which provides free breakfasts to hungry children in server poverty in UK primary schools – as essential fuel for learning.  Find out more about the charity here.