Over 100mph – a new speed record in downhill skiing 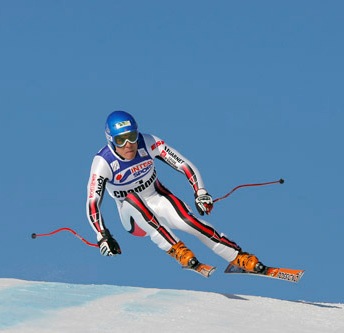 French ski racer Johan Clarey has set an unofficial downhill speed record of 100.59 mph (161.9km/h) during a training run at the FIS World Cup in Wengen in Switzerland – the fastest speed ever recorded in Alpine ski history.

The Lauberhorn Downhill at Wengen is regarded as the longest and fastest Downhill course on the World Cup circuit.   The racers usually hit their maximum speed at the Hanneggschuss straight (around the two-minute mark on the 2.5-minute run), just before the last gruelling s-turns  – and this is where Johan clocked over 100mph whilst training on 16 January.

The Lauberhorn is one of the biggest sporting events in Switzerland with over 30,000 spectators gathering on the mountain in Wengen this weekend to watch the world’s fastest skiers… and they weren’t to be disappointed.  The Hanneggschuss never fails to thrill – the last official speed record – 98mph – was also set here, by Stephan Tanne!

But even though Clarey can lay claim to the all-time downhill speed record, he didn’t win the race on the big day – Saturday 19 January.  First place on the podium went to Italian Christof Innerhofer who ‘officially’ clocked 99mph during his impressive run.  He was the first Italian to win the Wengen Downhill in sixteen years.

Tigers in the snow at Longleat Safari Park