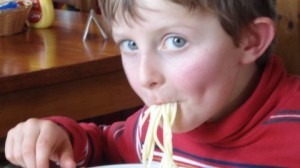 Here’s food for thought on your next French ski trip… as you sit in a mountain-top restaurant, trying to savour your tartiflette, while your children stick chips up their nostrils, spill their drinks and hurl croissants like boomerangs across the room… there’s a new book out called French Children Don’t Throw Food.

Written by American journalist Pamela Druckerman, the book centres on the author’s experiences following her pregnancy and raising of her daughter, Bean, in Paris.   The Irish Independent newspaper’s review sums its content up perfectly: “At first glance, the book offers tantalising advice for any new mum: its premise is that by absorbing the wisdom of French parents, you too can have wonderfully behaved children. Your relationship with your partner will flourish, et voila, you’ll become sexier, too. Sacre bleu: that sounds great, but is author Pamela Druckerman perhaps viewing child-raising in France through rose-tinted spectacles?” 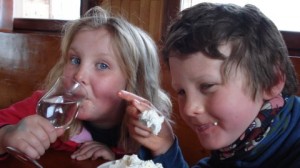 It would certainly seem she is.  Taken with a pinch of salt, it is nonetheless a well-written, light-hearted look at cultural differences and a reminder that parenting is no easy task… not even when we’re on holiday!

But the last word should undoubtedly go to John Crace, and his amusing take on the book published at the online Guardian yesterday:  “Meals are a disaster. Bean creates havoc. I notice that none of the French children are behaving this badly. I wonder pourquoi. ‘C’est par ce que votre fille is called Bean,’ a maman confides in me. ‘Quel type of ridiculous nom is that? No French parent would caller their child Haricot.’”

The ski trip with “Tignes” appeal