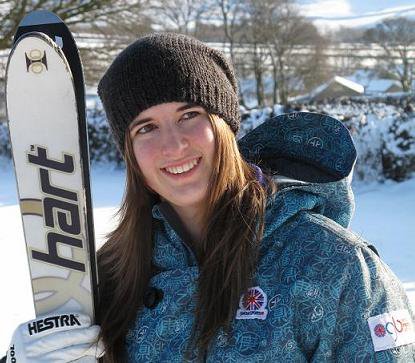 British freestyle skier Ellie Koyander once described the Olympics as “the greatest show on earth”.  Now the Games are on home soil, she will be carrying the Olympic Torch for a leg of torch procession – through Burton upon Trent at 8.20am tomorrow morning!

Just moments ago she wrote on her Facebook page: “So excited to carry the flame tomorrow! Have to leave the house at 4am!eeek! to be in Burton for 5.30am and running at 8.20am!! #excited.”

Ellie made her Olympic debut when she was just 18 years old, at the 2010 Vancouver Winter Olympics, where she came 24th in the discipline of Women’s Freestyle Moguls Skiing.  She is currently Britain’s top female moguls skier and a member of the British Freestyle Ski Team. 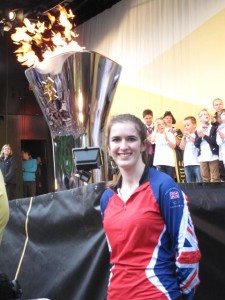 Ellie at the Olympic cauldron ignite today in Derby

Last March, in an interview with In the Snow magazine about her involvement at the 2010 Games, Ellie said: “Seeing the Olympic flame being lit at the 2010 Vancouver opening ceremony … what a spine tingler! … It gives you a sense of how special the Olympics are, and being part of it, gets ignited inside everyone at that precise moment…”

She also remarked: “I have real respect for anyone in any sport, any discipline, at any level, who is given the opportunity to perform for their country…. I am so excited, really excited, for all the athletes emerging in the summer sports who are going to go to their first Games, and will have pushed through the hard times – there is just no such things as an easy ticket to the Olympics.”

For all the winter athletes, their next games in Russia (February 2014) are just 18 months after the London Olympics, and Ellie provides first-hand insight into the trials and tribulations of Olympic hopefuls:  “It’s the culmination of four years blood, sweat and tears, striving to be the best in the world,” she commented.  “An Olympic event is like nothing else.  You can’t practice being a competitor in an Olympic spectacle.  It’s a test of your 0-60mph factor’ and it doesn’t get any bigger, standing in the start gate with 3 billion people watching you live on TV and the internet, and a stadium-full of people at the bottom or the run, all waiting to see what you can do.”

Ellie is just one of a series of winter sports stars involved in London’s 70-day, 8,000-mile torch relay leading to the Opening Ceremony of the Games on 27 July.  Find out which other Winter Olympians are involved (and when and where) by clicking here.

Summer holidays in the Alps