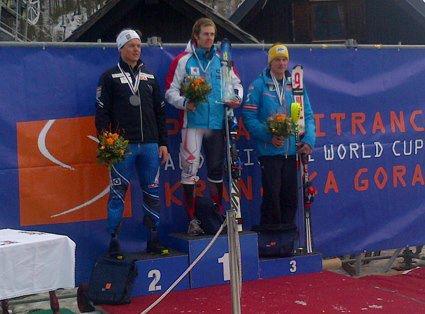 David Ryding has today won the Europa Cup Slalom Series.  He is the first British racer ever to win this event.  And he left it until the very last race, held at Kranjska Gora!

It was a nail-biting finish to a hotly contested race series.  Ryding had skied out of the race on the same hill the day before!  After the first run he was lying in 27th place.

Here’s how Ryding described the result on his Facebook page:

“A day of two halves thats for sure!  Unreal to think I could walk away with the Europa Cup Slalom Trophy, especially after the first run, but some how I managed it.I was a little nervous to say the least first run, but i got into the course and started to get things going until half way down I thought it was all over. I fell inside coming into a vertically and went the wrong side of the entrance gate, i managed to do a good enough recovery to check round my direction and ski the vertical backwards. It was as good as over for me in my mind after that, but I knew if things went my way I just needed 3 points to have a chance so I just hammered down to the finish.Not really paying much attention to the race I went to the ski room and thought I may as well just re tune my skis to hammer some ruts 2nd run, and get my mind off what was going on.

To my amazement I managed to be in 30th so first down 2nd run. I still thought it was too much an ask being 3.47 off first run but it was kind of a free pass to give it one hell of a go. So I did that and with a pretty decent run I just started to wait in the finsh, all in all pretty glad that I didn’t have to have the pressure of any more Europa Cup runs for the season. In the end I moved back up to 9th and somehow managed to win the title.

A crazy crazy day, I guess it just shows, you just have to keep fighting no matter what, and i guess today I got the rub of the green. Pretty cool to have the national anthem played on the podium too!”

Now with Sochi 2014 very much in his sights, as we reported in our story about British medal chances at the next Winter Olympics, Ryding is back on the slopes for training tomorrow morning ready to defend his Slovenian Title before heading to Méribel for the Delancey British Alpine Championships.

A brilliant result like this is a real morale booster for the British ski team and will hopefully help the team search for more sponsors to boost the vital support already provided to British Snowsports by Delancey.