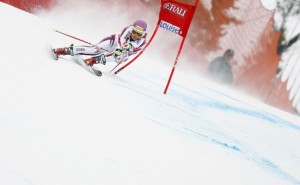 Chemmy in training at Lake Louise

British number one skier, Chemmy Alcott, is returning to racing.

The women’s downhill season has started this week in Lake Louise, and Chemmy is making her comeback to racing on the very same course where she experienced serious leg injury in a horrendous crash two years ago.
After Tuesday’s training session, she apparently burst into tears as she reflected on her two-year struggle.  The accident left her with a broken bone protruding from her lower right leg.
Following major surgery, and with nine screws, a metal plate and lengthy intensive rehab, she is now hoping to work her way back to top-class ski competition, with the aim of a third Olympic appearance in Sochi in 2014.

It is clearly an emotional return for Chemmy, who wrote on her Facebook page yesterday: “I wanted my comeback to be here at Lake Louise because of the pristine pistes, huge cheers and big grinning smiles!”

After a practice run yesterday, a fellow ski racer, Larisa Yurkiw, commented: “My friend and teammate… Chemmy flew down Lake Louise at 131km/hr straight through the place that handed her two years of physical and mental turmoil. With bravery and an incredible mindset, Chemmy is back.”

Welcome back Chemmy, and good luck from us all at FSN!