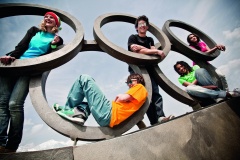 The first Youth Winter Olympic Games comes to Innsbruck in 2012

The first ever Winter Youth Olympic Games are scheduled to take place in Innsbruck in January next year, with 1,000-plus competitors (aged 14-19 years) from over 60 nations competing against each other, with the aim of introducing young athletes to the spirit of the Olympics as well as providing a public international arena for the most talented youngsters specialising in winter sports.

As well as the traditional Olympic winter sporting events, the 1st Winter Youth Olympic Games will also feature some brand new disciplines never seen before at an Olympic event.  For the first time there will be mixed-gender and mixed-NOC (National Olympic Committees) events, which will see athletes from different countries competing on the same team. These include Ski Halfpipe, Snowboard Slopestyle and Women’s Ski Jumping.

We all bemoan how difficult it has been getting hold of 2012 Olympic tickets for the UK, so why not be part of these Olympics instead?  After all, these competitors are the Olympians of the future.  There are 66,000 free tickets available online at www.innsbruck2012.com.

FamilySkiNews.com will be providing regular reports in the lead-up to and during the Games.