… and ski resorts in the Alps are opening already!

Following on from some early Autumn snow and reasonably cold temperatures, a handful of resorts are starting up their lifts surprisingly early in the Alps. Most are glacier resorts but two non-glacial resorts have also opened.

A couple of high-altitude lifts in the Austrian resort of Kitzbuehel (see photo above) opened at the weekend, and Sulden in the Sud Tirol in Italy also opened a limited number of runs. 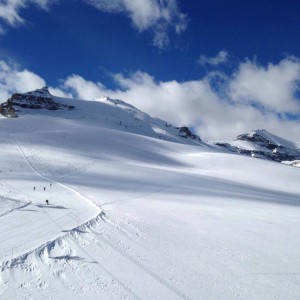 Other resorts currently open at the weekend in Italy were Val Senales, Passo Stelvio and Cervinia.  In Austria, the glacier resorts of Stubai, Hintertux, Kaprun, Kaunertal; also in Sölden, one of the filming venues for the latest 007 movie Spectre (as we reported in an earlier story HERE).

In France, Les2Alpes always opens for October half-term, and conditions this year are reasonably good.  It will then officially reopen on 5 December. Tignes opened earlier in the month.

In Switzerland there was skiing in Zermatt, Saas-Fee and St Moriz.