With everyone talking about El Niño this winter, there is much anticipation that the forthcoming ski season will be an epic one.

So what is “El Nino” – this weather term that everyone’s bandying around?

El Niño is essentially a warming of the Pacific Ocean, starting near the equator off the coast of South America, which has a major knock-on effect on weather in the rest of the world.

El Niño occurs when winds in the Pacific weaken or reverse direction, resulting in a warming of the ocean in the central and eastern Pacific, mainly along the Equator. Clouds and storms follow the warm water, altering jet stream paths around the world.

During an El Niño phase, which lasts about a year and happens every 2-7 years, the physical relationships between wind, ocean currents and the temperatures of the seas and the atmosphere break down into a destructive pattern, causing potentially major shifts in weather patterns worldwide, as explained on the BBC website HERE.

Europe is unlikely to be majorly affected by the El Niño weather, although we could be in for a colder, dryer snowier winter than usual or, equally possibly, a milder, wetter one. Some say the severe flooding in northern England is a factor.  However, there has never been any proven link between snowfall in the Alps and El Niño.

South America has experienced some of its worst flooding in 50 years in parts of Paraguay, Argentina, Uruguay and Brazil. Indonesia and Ethiopia are experiencing some of their worst droughts in decades. 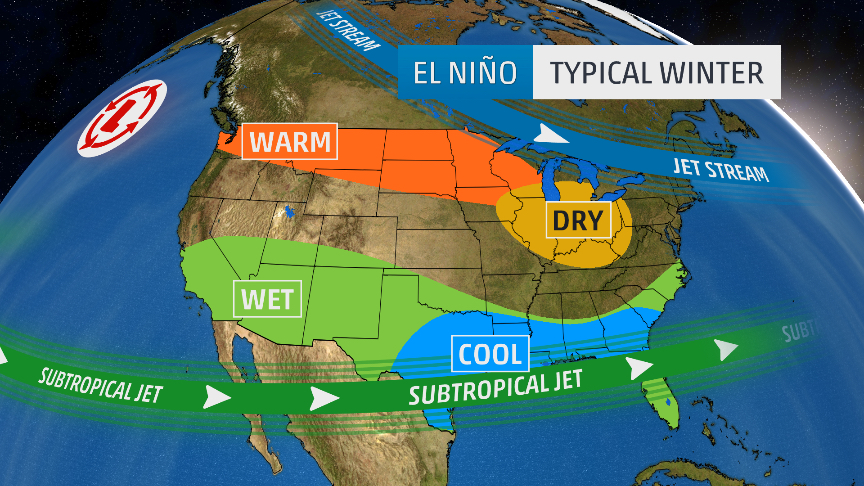 So far this winter, the United States has certainly experienced an unusual winter: the west coast has already seen more rain than usual – excellent news after lengthy drought conditions, and excellent snow conditions, while the east coast has been hammered by massive snow blizzards.

According to the World Meteorological Organization, which is based in Geneva, this winter’s El  is the strongest since 1997-98 and at its peak between November and January, with its effects being felt right through until May. It is anticipated that the WMO will announce that 2015 was the warmest year on record, with El Niño a significant contributing factor to last year’s unprecedented heat.

However, while the ski season in the Alps has been decidedly slow to get started, with a distinct sparsity of snow at the start of the season, we probably can’t blame El Niño.