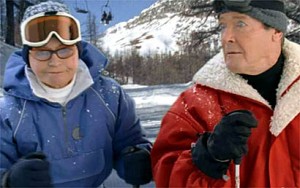 Despite all the hype about James Bond with the imminent release of the latest 007 movie Skyfall, Roger Moore has announced that he is giving up skiing.

The 84-year old former Bond actor has long been a keen skier.  He lives in Switzerland – currently in Crans-Montana, and previously in Gstaad – two eminently fashionable ski resorts.

He confided in The People newspaper that he is concerned about snowboarders on the slopes: “I have stopped skiing because I ‘m nervous about all the snowboarders.  I’ve been hit by a couple. It’s really knocked my confidence.  It’s much more difficult getting up at my age.”

Roger Moore will be remembered for his ski chases in For Your Eyes Only, and The Spy Who Loved Me (although he had a stuntman to do the tricks).  He is also – ironically – the only Bond to snowboard in a film to date – A View to A Kill.    You can watch it here:

Moore has long been associated in the media world with skiing.  He even appeared on a Tesco Christmas advert in 2003, alongside Prunella Scales (as pictured above).

The advert shows Dotty, played by Prunella Scales, seducing the former James Bond on a ski slope and inviting him back to her chalet for a “Christmas surprise”.  Having exchanged gifts and tucked into a lavish meal, Dotty moves in to kiss Moore. As she leans closer, the film dissolves to show it was just a dream.

Scales is said to have remarked at the time: “I read the script and thought ‘I am going to get kissed by Roger Moore’.  And then, like any actress’s worst nightmare, I discovered it was only a dream.”

You can find clips of all the Bond ski chases including George Lazenby’s infamous escape from atop the Shilthorn in Muerren in 1969 and Timothy Dalton’s witty chase using a cello case as a toboggan, in our previous report celebrating the 50th birthday of James Bond.  It also features a trailer for the eagerly-awaited new 007 movie, Skyfall, due out on 26 October.

Ski train to the Alps