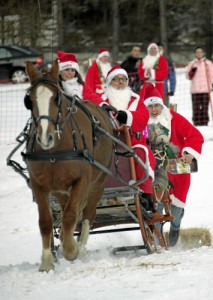 After one of the warmest autumns in the Alps for nearly 150 years, it’s finally snowing.  Not a lot… but better than nothing.   And more snow is forecast for Tuesday and Wednesday.  The heaviest snowfall has fallen in the western European resorts, but resorts in the east have received a dusting too.  Fingers crossed that this fresh snow will considerably improve the overall snow cover across the Alps.

The unseasonably warm weather has made many skiers stall on booking their pre-Christmas breaks, despite some astonishing price slashes in ski holidays.  Numerous ski resorts have had to face difficult decisions about delaying their official openings, and Val d’Isere has cancelled its World Cup event (due for 10-11 December) due to lack of snow.  It will now take place in Beaver Creek, Colorado, which is enjoying large amounts of fresh snow at present.

In Austria’s Carinthia province, Hotel Hinteregger gathered together 15 chimney sweeps – considered a symbol of good-luck – for a special snow ceremony at the foot of the Katschberg mountains.  Hotel manager, Wolfgang Hinteregger is reported to have said: “We’re confident things will go well now.”

Thankfully, despite reports that 2011 has been Switzerland’s driest autum on record, there was enough snow for the annual Clau Wau Santa Claus World Championships, which took place in Samnaun on November 25-26 to mark the start of the ski season.  Over 100 Father Christmas look-alikes competed in a series of races including chimney climbing, toboganning and ice-sculpting to become the Santa Claus World Champion.