Visitor numbers to Switzerland over the winter have dropped. Our financial advisor, Peter Derrick reports on how the tourism industry is now calling for government action, to avoid further decline in the number of skiers and snowboarders to the Swiss Confederation.

Provisional figures from January and February in Switzerland show a fall of 2.9% compared with the same period in 2015. The statistics (from the Swiss Federal Statistical Office) are based on overnight stays right across the nation, including all the cities.  The figure is almost certainly higher in ski resorts.

It’s more than a year since the removal of the EUR/CHF exchange rate floor (in January 2015).  At the time, Credit-Suisse said that “2015 will go down in economic history as the year of the Swiss franc shock”.

The strong currency is still causing massive losses to the tourist industry.

Over the past twelve months, there’s been considerable pricing pressure on hotel and catering sectors, with both sales and margins down.  Around 50,000 jobs in tourism have been cut.  The nation’s Alpine tourism industry is heavily dependent on its European guests, and the EUR/CHF exchange rate (currently at €1/CHF1.11) remains a challenge.

Casimir Platzer, head of Gastro Suisse (the country’s largest hotel and catering industry employers’ association), commented in the Schweiz am Sonntag newspaper: “The alarm bells do not seem to have been heard. That might be because the situation is not the same everywhere. The cities are prospering – in the mountain areas the guests are staying away. It is time to act.” 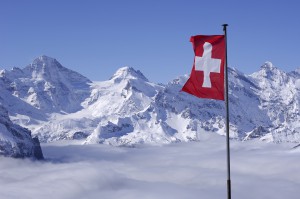 As the strong franc continues to affect hotels and catering in the early months of 2016, Switzerland remains too costly for many European guests as a vacation destination. Skiers travelling to Swiss resorts this winter still found them considerably more expensive than their competitors within the Eurozone. (Thankfully, the Swiss ski industry was largely untouched by the Swiss franc shock in winter 2014/15 mainly due to early bookings.)

Now, 17 months on from the Swiss franc shock,  Credit Suisse are forecasting moderate growth in the Swiss economy, and an upturn in the travel industry too.. for later in the year.

It depends on the recovery of the European economy and the stabilization of the EUR/CHF exchange rate.

It will be interesting to see how the results of Britain’s Referendum on Europe on 23 June will affect the European economy and the travel industry in Europe and beyond.  Ironically, the whole concept of a Referendum is a very Swiss thing!…

The team at FamilySkiNews love visiting Switzerland year-round, made several visits to Swiss ski resorts since the Swiss franc shock.  See here for our recent reports from Engelberg and Zermatt as they celebrated the 150th Anniversary of the Matterhorn.